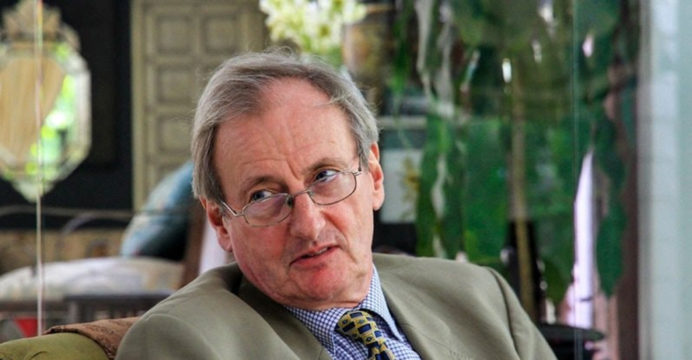 A true friend of Bangladesh, journalist Simon Dring passes away

Simon Dring, an eminent British foreign correspondent, television producer and presenter, passed away while undergoing treatment at a Romania hospital on Friday at the age of 76.

He is survived by his wife Fiona McPherson, an Australian human rights lawyer, and three daughters, relatives and a host of admirers and well-wishers.

Simon Dring, a “true friend” of Bangladesh, covered the atrocities of Pakistani forces during the great Liberation War of Bangladesh.

He was among about 50 foreign journalists confined to their hotel, the Intercontinental, in Dhaka on Mar 25, 1971.

In a condolence message, the minister said Dring was the first foreigner journalist to witness the mass killing in 1971. He wrote reports risking his life and informed the world about the most gruesome and merciless acts by Pakistani forces, he added.

Hasan said the contribution of Dring, who was awarded Muktijuddha Maitree Sammanana by Bangladesh government, will ever be remembered.

In separate messages, they prayed for the eternal peace of the departed soul and conveyed deep sympathy to the bereaved family.

Born on January 11, 1945, Simon John Dring worked for Reuters, The Daily Telegraph of London, and BBC Television, Radio News, and Current Affairs, covering over 30 years of major stories and events, including 22 wars and revolutions, around the world, according to Wikipedia.

He was the first foreign journalist who risked his life to present the real picture of the Pakistani army’s mass killings and barbarity on unarmed Bangalees to the world community in 1971.

In 2012, the Bangladesh government awarded ‘Muktijuddha Maitree Sammanana’ (Friends of Liberation War Honor) to Dring for his outstanding role during the great Liberation War in 1971.