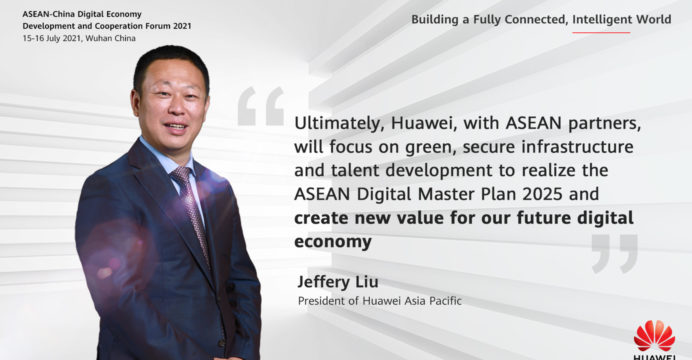 Climate change and environmental issues are becoming global challenges. Though carbon emissions declined over the past year due to the economic slowdown and worldwide lockdowns, emissions are rapidly rebounding as economies reopen. Shifting to a circular economy and achieving sustainable development is now a common goal for all countries.

Potential climate change has a significant regional impact, with six of the 20 most vulnerable countries in the world being ASEAN member states. ASEAN has taken actions to address climate change through various environmental, economic, and social activities over the years. Thailand, for example, has set a target of reaching peak carbon emissions in 2030 and then achieving net zero emissions in 2065.

“Huawei has been leveraging its extensive experience in power electronics and energy storage as well as technical expertise in 5G, cloud, and other innovative technologies, to develop its digital power business and provide digital power solutions for different industries,” said Huawei Asia Pacific President.

To promote renewable energy, Huawei has deployed its digital power solutions in more than 170 countries and regions, serving one-third of the world’s population. As of December 2020, these solutions have generated 325 billion kWh of electricity from renewable sources and saved a total of 10 billion kWh of electricity. These efforts have resulted in a reduction of 160 million tons in CO2 emissions.

In Singapore, for example, Huawei FusionSolar Solution has supported Sunseap Group, a solar energy solutions provider, to build one of the world’s largest offshore floating Photovoltaic (PV) farms. With 13,312 solar panels, 40 inverters, and more than 30,000 floats, this five-hectare sea-based solar plant is estimated to produce up to 6,022,500 kWh of energy per year, supplying enough power for 1250 four-room public housing flats on the island and offsetting an estimated 4258 tons of carbon dioxide.

In Bangladesh, the country’s largest solar power plant, situated in Mymensingh, is fully installed with the Huawei Smart photovoltaic (PV) solution with 173K solar panels and 332 inverters through which it has been connected to the national grid. Mymensingh power plant has chosen Huawei Smart PV string inverters, SUN2000-185KTL with IP66 high-level protection, and Anti-PID technologies to safeguard the smooth running of the plant with the highest yields possible.

Bangladesh government has set the target installation capacity of 3168 MW in Vision 2021. This mega project is a significant step forward in fulfilling that target. Moreover, this 73 MW PV power plant will help the nation attaining the goal of generating 10 percent of the country’s total electricity using renewable energy by 2021.