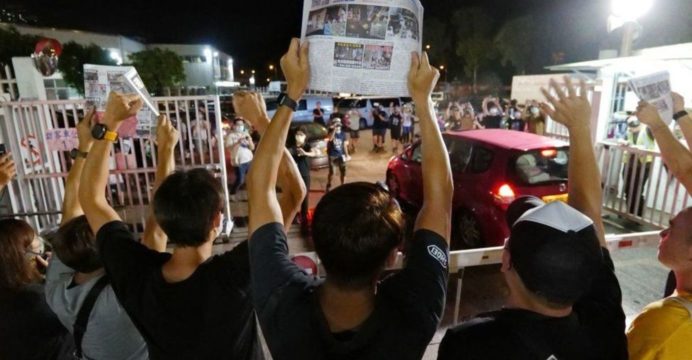 The continued targeting of pro-democracy journalists and publications is sending a chilling message to Hong Kong’s media, with experts warning of a devastating impact on press freedom in the city. The BBC’s Andreas Illmer reports.

On Sunday night, police announced that they had arrested a former senior journalist with the now-shut Apple Daily at the airport as he was trying to leave the city, reports BBC.

Apple Daily closed down after officials arrested its senior leadership under the city’s controversial national security law and froze its assets. Its owner, media mogul Jimmy Lai, was already in jail on a string of charges.

News of the arrest came hours after Stand News – popular with pro-democracy supporters – said it would shelve commentary pieces over fears of a crackdown.

Stand News is one of the last openly pro-democratic publications now left in the city. It was among a handful of relatively new online news portals that gained prominence during the 2019 pro-democracy protests.

Hong Kong guarantees its residents press freedom under the terms of an agreement which saw Britain hand the city back to China.

But industry stalwarts say that this is being blatantly violated under the national security law, enacted in June 2020 as a response to years of mounting pro-democracy protests. The controversial law criminalises secession, subversion and collusion with foreign forces and carries a maximum sentence of life in prison.

“Press freedom is withering and mired in uncertainty,” Chris Yeung, a veteran journalist and former chairman of the Hong Kong Journalists’ Association, told the BBC.

“The arrests worsened the feeling of fear prevalent among journalists since the enactment of the national security law,” he added. “The closure of Apple Daily has worsened the chilling effect on the media.”

The law was initially used against activists and protest leaders, but in recent months authorities have been targeting media outlets, with Apple Daily the first casualty.

The mix of tabloid gossip and pro-democracy voices had become the city’s biggest voice of dissent until its closure earlier in June.

Police said several of the paper’s reports had breached the national security law, for instance by calling for sanctions on Hong Kong or on mainland China.

Media reports suggest that like Apple Daily’s editors and owner Jimmy Lai, the journalist arrested on Sunday would also be charged under the national security law.

“The Hong Kong authorities actions against Apple Daily are outrageous and unacceptable because they blatantly violate media freedom, and treat independent journalism as a crime,” Phil Robertson of Human Rights Watch told the BBC.

“China’s leaders obviously intend to intimidate other smaller media outlets and their journalists by showing that critical reporting will be punished.”

The Hong Kong Journalists’ Association has criticised the latest arrest and asked police for an explanation.