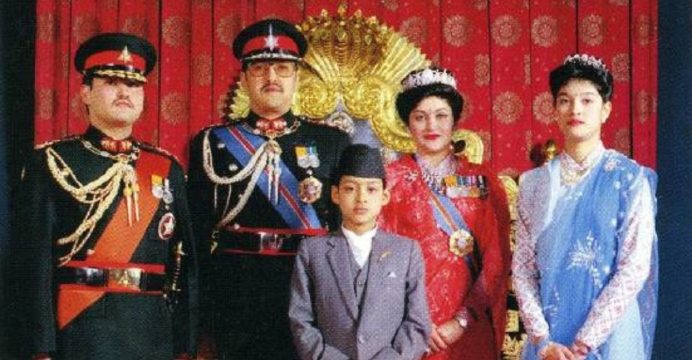 On June 1, 2001, Nepal was shaken by a horrible incident. It’s Nepalese Royal Massacre. It’s been 20 years today since the massacre took place. But, people still are unaware of the real motive behind this bloodshed.

The Royal family of Nepal, not even in their wildest dreams, had thought that the biggest threat to the monarchy lived right in the palace.

He shot down at least nine members of the royal family, including his father, King Birendra, and his mother, Queen Aishwarya.

After the shooting, Dipendra shot himself in his head. While he was in Coma, he was declared the King after King Birendra passed away. But, he died three days later and he was succeeded by his uncle, King Birendra’s brother, Gyanendra Shah.

NOBODY KNOWS THE REAL MOTIVE YET

After the massacre, Nepalese people took to the roads of Nepal and several theories float behind the motive of Dipendra behind this killing. But the real reason of the massacre is still unable to be defined.

While people believe that Dipendra was interested to marry Devyani Rana, nevertheless, the family didnt give consent to this as it is believed that Devyani was from a lower-class royal of India. Some people claim that Dipendra was threatened to be disinherited if he carried on with this.

There is another theory, which states that if the crown prince would have tied the knot with Devyanai, there would be a bigger possibility of the influence of India. Moreover, Rana was not at satisfied with Nepal, as the country was shifted from an absolute monarchy to a constitutional monarchy. They also thought that, more power was given away after the People’s Movement in 1990.

People started experience a turbulent time in Nepal after the royal massacre, which resulted the abolition of monarchy in 2008.

CROWN PRINCE WAS FOUND RESPONSIBLE FOR THE MASSACRE

After Gyanendra became the king, he said that “accidental discharge of an automatic weapon” was the main reason behind the killing.

Nevertheless, later Gyanendra said that he made this claim owing to ‘legal, constitutional hurdles.’ Later, Crown Prince Dipendra was held responsible for the killing.

The massacre led to series of incidents in the country and many people and eye-witnesses were asked and authority carried out investigations and they declared Dipendra as the offender.

Nevertheless, as Gyanendra became the king, the belief in the Nepalese populace saw a sharp decline. Some believe that the massacre was one of the reasons for finishing the monarchy in the country.

OTHER CONSPIRACY THEORIES THAT REVOLVED AROUND THE MASSACRE

Many conspiracy theories have brewed up right after the massacre that took place on June 1, 2001. Many raised questions to Gyanendra’s family and nobody in his family was killed and they only had minor injuries. But, the full family of Birendra and Dipendra was killed.

Based on the interviews of two palace maids, a book titled “Raktakunda” reveals that Gyanendra was behind this as he wanted to become the king and he was not popular. Nevertheless, there was no evidence which can support the claims.