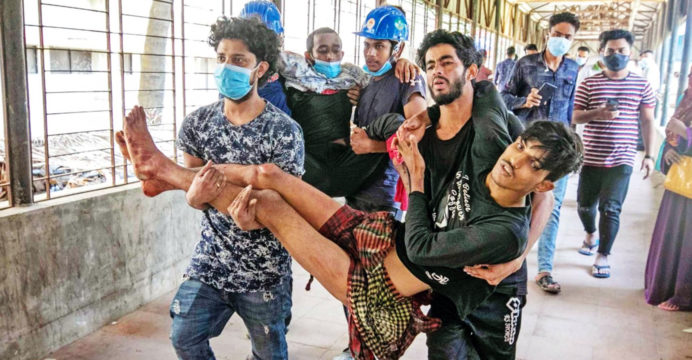 At least five coal power plant workers are now dead for protesting unpaid wages and workers’ rights in Bangladesh. They were shot and killed at the construction site of the Banshkhali coal plant, also known as the Chittagong or Chattogram power station, financed by the Chinese-owned Shandong Electric Power Construction Corporation III (SEPCOIII) and Bangladesh-based S. Alam group.

According to the local police, the violence broke out around 10:30 am on Saturday (17 April) at the coal-fired power plant. At least 20 others were injured in the clash, including police and local residents.

“As a young climate justice activist in this country, I am utterly horrified and saddened by the killings of these workers. They expressed their democratic rights to protest for workers’ rights and their own unpaid wages – but paid with their lives. There must be an investigation into these killings, and the workers’ situation at the SEPCOIII coal plant. The authorities must be able to tell us why they fired on these workers. This is already the second time workers have been killed in relation to S Alam, and there must be a stringent inquiry. As Bangladeshis, we deserve safety and accountability.”

This is the second time the S. Alam group has been linked to the killing of workers since 2016 where six workers were killed protesting the construction of a plant.

“This is a horrific tragedy that should not have happened at all. We are now in a pandemic and an economic crisis, and workers are not being paid what they are owed, but instead shot in cold blood. The workers should not have even had to protest in the first place — for them to be paid is basic human rights. This is a clear example of how coal is destructive to our lives. These companies not only set us on a path to climate disaster. They also cost the lives of five hardworking men — sons, fathers, brothers to their families. We demand justice for them. S. Alam is one of the country’s top industrialists, and they should be investigated for the non-payment of wages and the reasons that these workers were killed.”