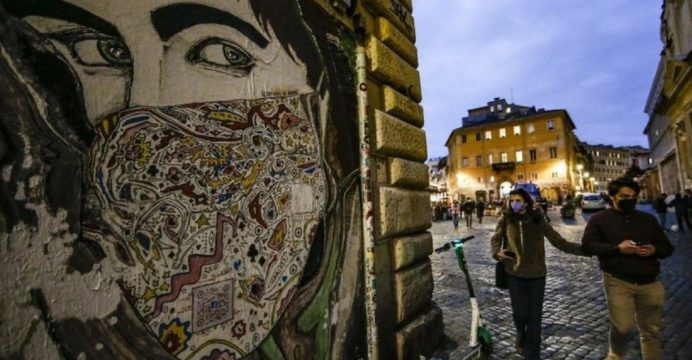 Shops, restaurants and schools to be closed in Italy due to “new wave” of the coronavirus outbreak.

Shops, restaurants and schools will be closed across most of Italy on Monday, with PM Mario Draghi warning of a “new wave” of the coronavirus outbreak.

For three days over Easter, 3-5 April, there will be a total shutdown, reports BBC.

Italy, which one year ago imposed one of the first national lockdowns, is once again struggling to contain the rapid spread of infections.

The country has reported more than 100,000 Covid-related deaths, Europe’s second highest tally after the UK.

Italy’s vaccination campaign has been hit by delays, as has been seen elsewhere in the European Union.

Last week the government in Rome blocked the export of 250,000 doses of the Oxford-AstraZeneca vaccine to Australia in a bid to address shortfalls of vaccines.

WHAT ARE THE NEW RULES IN ITALY?

From Monday, schools, shops and restaurants will shut in more than half of Italy, including the two most populous regions containing Rome and Milan.

Residents will be required to stay home except for work, health or other essential reasons.

The extra restrictions would last until Easter, Mr Draghi’s office said, and over the Easter weekend the whole country would be turned into the high-risk “red zone”.

“I’m aware that today’s restrictions will have consequences on the education of your children, on the economy and on everyone’s mental health,” Mr Draghi said.

“But they’re necessary to avoid a worsening of the situation that would require even stricter measures.”

Cases have been rising across Italy for the past six weeks, exceeding 25,000 a day.

In a majority of the country’s regions “hospitals and above all intensive care units are already overloaded”, the GIMBE health think-tank warned this week, the AFP news agency reported.

The island of Sardinia is the only region where infection rates are low.

Italy has had nearly 3.2 million confirmed infections since the outbreak began last year.