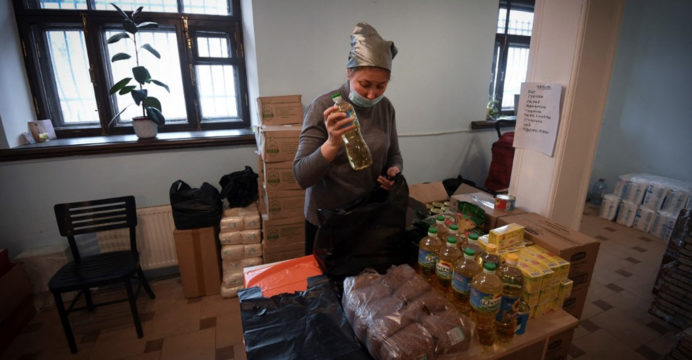 Crowds have been growing at the Martha and Mary Convent in central Moscow since the start of the coronavirus epidemic.

The white-walled women’s monastery houses one of Russia’s best-known charities that gives out free food parcels, among other projects, reports BSS.

“Before the pandemic we had around 30 to 40 people a day,” Yelena Timoshchuk, a social worker at Miloserdie (Mercy) told AFP, leaning against a table loaded with bottles of sunflower oil.

Many of the visitors who queue for packages containing buckwheat, sugar, and tea are retired but there are also those who have lost their jobs or had their salaries cut.

The coronavirus pandemic has delivered a new blow to Russia’s stagnating economy, which was already chafing under Western sanctions, low oil prices and weak corporate investment.

Observers say that rising poverty, falling incomes and lack of tangible government support during the pandemic are fuelling discontent with President Vladimir Putin’s two-decade rule and strengthening the opposition.

Answering the jailed Kremlin critic Alexei Navalny’s call, tens of thousands of people have protested across Russia over the past few weeks, and his team plans more protests ahead of parliamentary elections in September.

Russians’ real disposable incomes have been falling for the past half- decade and contracted by 3.5 percent in 2020, while the cost of basic foodstuffs surged.

Despite government efforts to rein in inflation, the cost of sugar was 64-percent higher in January than it was a year earlier.

Wearing a red cap over long braids, 66-year-old Sandra said she had stopped going shopping and instead turned to Miloserdie’s free food parcels.

“You can’t buy anything anymore,” said the pensioner, who did not give her last name. “Before I could afford to feed the birds but now even grain is expensive.”