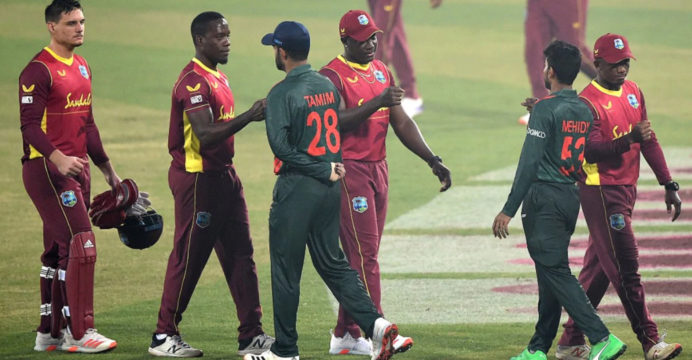 Bangladesh return to international cricket with the victory against West Indies

Bangladesh marked their return to international cricket after more than a 10-month halt due to coronavirus pandemic with a convincing six-wicket victory over West Indies in the first of the three-ODIs at the Sher-e-Bangla National Stadium in Mirpur today.

Kyle Mayers and Rovman Powell tried to put in some resistance after that but that did not happen as debutant Hasan Mahmud bagged the wicket of Powell (28 off 31) in the 30th over while Mehidy Hasan Miraz had Mayers (40 off 56) caught at slip in the next over.

The Windies folded soon after for 122 as Mahmud scalped two more wickets to wrap it up. Shakib finished with impressive figures of four for 8 in his 7.2 overs that featured a maiden and was adjudged player-of-the-match for his effort while Mahmud finished with figures of three for 28 in six overs, including a maiden.

In response, skipper Tamim gave the Tigers a decent start, laying the foundation for the win with a 69-ball 44. Bangladesh did lose three batsmen — Liton Das, Najmul Hossain Shanto, and Shakib — to the spin of Windies debutant Akeal Hosein but that could not stop the Tigers to romp to victory.