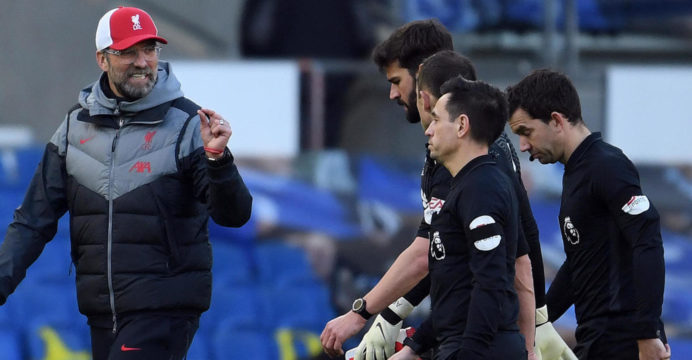 Jurgen Klopp again fumed at a “dangerous” schedule as Liverpool had two goals disallowed and conceded two penalties in a 1-1 draw at Brighton, while Man City clicked back into gear with a 5-0 thrashing of Burnley.

Liverpool edged back to the top of the Premier League table, a point ahead of Tottenham, but was left frustrated by Pascal Gross’s stoppage-time penalty which salvaged a point for Brighton.

Klopp had voiced his displeasure all week at facing a lunchtime kick-off just three days after a Champions League defeat to Atalanta.

Already hit by a huge list of injuries, the Reds suffered another setback when James Milner had to be replaced with a hamstring problem in the second half.