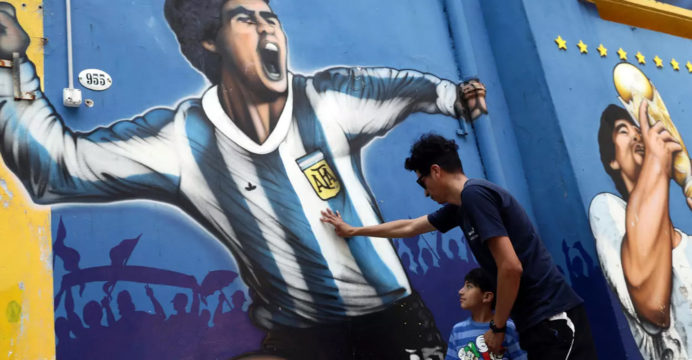 Argentines mourn Maradona, ‘the most human of Gods’

Stunned Argentines were plunged into grief Wednesday by the death of the country’s favorite son Diego Maradona, a sublimely gifted sporting hero they saw as “the most human of Gods.”

The news fell like a hammer blow a nation beaten down by months of economic crisis and the coronavirus pandemic, but one where soccer is seen as a panacea for all ills.

At 10:00 pm Buenos Aires exploded in cheers, horns, sirens and lights for the man who famously wore the number 10, after a viral social media message called for “one last applause.”

The homage resounded throughout the night in all the neighborhoods of the Argentine capital, AFP correspondents said.

At the Diego Maradona stadium, home to the Argentinos Juniors club where Maradona played as a child and made his debut as a professional player, fireworks were launched as a large crowd flooded into the field to the cry of “Maradooo, Maradooo.”

Earlier, fans searching for a place to grieve gravitated towards the Obelisk landmark in downtown Buenos Aires — and, of course, the Bombonera, the steep-sided cauldron of a stadium that is home to Boca Juniors, where Maradona’s genius was forged.

“Today’s a bad day. A very sad day for all Argentines,” President Alberto Fernandez summed up in an interview with sports channel TyC, after declaring three days of national mourning.

All around the city, the mourning had already begun as fans stood forlornly beside banners in homage to the Number 10, showing Maradona — who died aged 60 of a heart attack — in his dashing prime.

Many of the banners simply said D10S, a play on the Spanish word “dios” for “God” that includes Maradona’s jersey number.