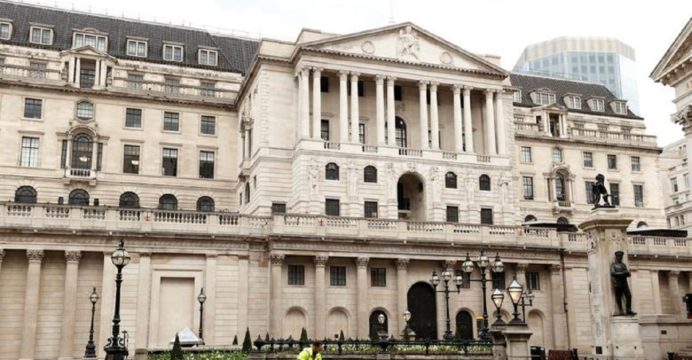 The Bank of England is set on Thursday to boost its cash stimulus to fight financial fallout from the coronavirus, as England enters a second lockdown.

Concluding a regular meeting, the BoE is also likely to revise down central bank forecasts for UK economic growth amid deadlock over Britain’s post-Brexit trade agreement with the European Union, reports BSS.

Analysts expect its key interest rate to stay at a record low 0.1 percent as the bank refrains for now from taking borrowing costs into negative territory for the first time.

Thursday’s decisions, which are due at 0700 GMT, come as England begins a minimum four weeks of stay-at-home restrictions, as the UK government seeks to stem a second wave of Covid-19 after similar actions elsewhere in Europe.

He added: “With uncertainty picking up both at home and abroad, downward revisions to the growth outlook appear inevitable.”

The bank could also make reference to the latest financial markets  volatility sparked by US election uncertainty which puts into doubt also a huge US economic stimulus package.

“Amid the noise of the US election and its impact on asset markets, the Bank of England has the unenviable job of having to change course this week,” noted Geoff Yu, senior market strategist at BNY Mellon.

“As was the case with the European Central Bank in October, the advent of the winter wave of the pandemic has materially altered assumptions for the economy over the short and medium term.”

UK economic recovery hopes have been shattered after Prime Minister Boris Johnson’s decision at the weekend to put England into a second lockdown — prompting the government to extend a significant jobs support scheme until the end of November.

Britain has been among the worst-affected countries by the virus outbreak, with 47,000 deaths from more than one million positive cases, but Johnson’s decision to put England in a fresh lockdown came as a surprise.

Capital Economics research group said the second England-wide lockdown should cause UK economic growth to fall by about eight percent in November month-on-month, prompting the unemployment rate to hit nine percent next year.

“Overall, this second lockdown may set back the economic recovery by six months,” it said in a note to clients looking ahead to the BoE update.

Under QE, the BoE creates cash that is then used to purchase assets such as government and corporate bonds, with the aim of boosting lending and stimulating economic activity. The bank first embarked upon the policy in the wake of the global financial crisis.