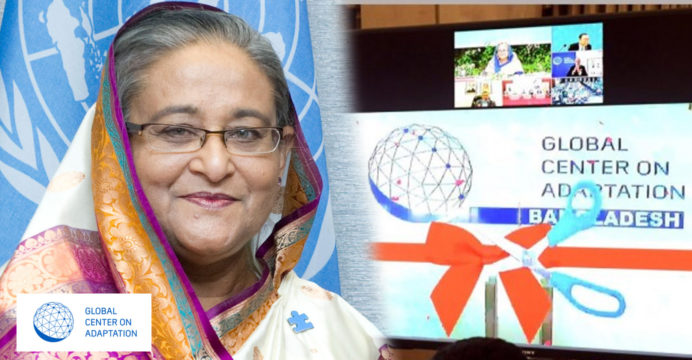 Prime Minister Sheikh Hasina inaugurated the South Asian Regional Office of the Global Center on Adaptation (GCA) in Bangladesh, calling on all to address the risks of climate change and implement the Paris Agreement signed in 2015.

“Climate change is a global problem,” she said. “Therefore, I call on all countries to increase the amount pledged for the implementation of the Paris Agreement, signed in December 2015, by December 31 this year, in addition to addressing climate risks.”

Prime Minister Sheikh Hasina and GCA President and former UN Secretary-General Ban Ki-moon jointly inaugurated the Virtual GCA Regional Office in Bangladesh. This inauguration of the regional branch in Dhaka is dedicated to the birth centenary of Father of the Nation Bangabandhu Sheikh Mujibur Rahman.

The Prime Minister hoped that this office would serve as a ‘Center of Excellence’ in the region and a facilitator of adaptation to tackle climate change.

Today our office in Bangladesh opens its doors. The new team aims to scale up the innovative solutions we’re already seeing in South Asia to accelerate climate resilience across the region @PVV_GCA https://t.co/FcCwlfA3M9 pic.twitter.com/02Bma8aRG9

She said, “I hope that this office will work to solve the best adaptation problems of Bangladesh and other countries in the region and through this, the countries will help each other.” It will be a center of excellence for the region to adopt and adapt to the effects of climate change. ”

"An historic opportunity" – Her Excellency, Sheikh Hasina, Prime Minister of Bangladesh speaking at today's launch of our new regional office in South Asia based in Dhaka. Together we can #AdaptOurWorld pic.twitter.com/NCPEI6hqT3

Sheikh Hasina stated, “Bangladesh is committed to implementing the Paris Agreement and taking all possible measures to prevent global warming from greenhouse gas emissions and other environmental hazards. The government has undertaken various mitigation and adaptation programs under the Bangladesh Climate Change Strategy and Action Plan formulated in 2009 to address the effects of climate change. We formed the Bangladesh Climate Change Trust Fund in 2009 and have so far allocated 430 million from our own resources to implement the 100th Plan. The government has been spending one percent of GDP on adaptation every year since 2010, amounting to 2 billion a year.”

Sheikh Hasina said,”The government has formulated a 100-year plan known as ‘Bangladesh Delta Plan-2100’ as a long-term plan to deal with the effects of climate change and natural disasters.”

Thank you for helping us launch GCA Bangladesh @MinPres. We cannot wait to see what the team achieves. https://t.co/FcCwlfA3M9 pic.twitter.com/4NjjNDUmto

In his speech, the Dutch Prime Minister congratulated Bangladesh for selecting Dhaka for the establishment of GCA Regional Office. It will be GCA’s first regional office in South Asia. “This is a clear sign of Bangladesh’s leadership in climate change adaptation,” he said.

The GCA Regional Center is being set up in the new building of the Department of Environment in Agargaon, Dhaka. It will be CGA’s first regional office in South Asia.