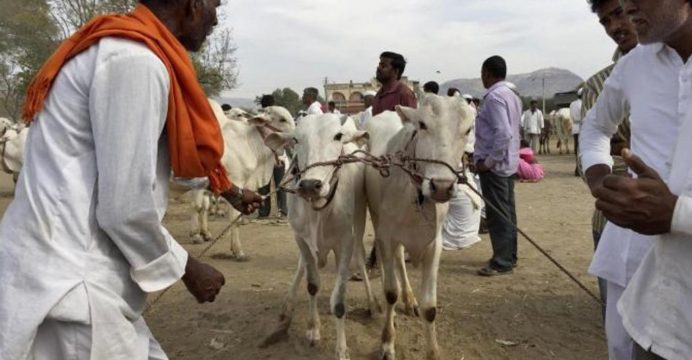 Indian police on Tuesday admitted they made a mistake in handling a deadly vigilante attack on a man suspected of cow smuggling by tending to his cows before taking him to hospital.

It took police more than 2 hours to take the victim to a nearby hospital, where he later died, opting instead to take his two cows to a shelter first, some 17 km (10 miles) away.

“We found that there was an error in the judgment of the police officer, who felt that the condition of the victim was good and that he was normal,” Rajasthan state’s top police official N. Ravindra Kumar Reddy told Reuters.

FILE PHOTO: People shout anti-government slogans during a protest against what the demonstrators say are recent mob lynchings across the country, in Ahmedabad, India, July 23, 2018. REUTERS/Amit Dave/File photo
“He gave him water. He gave him tea. Washed him off all the black, sticky mud. He then took the bovines to the shelter.

“It took the officer about 40 minutes to drop the cows to the shelter. That was the time he should have used for taking the victim to the hospital. For that error of judgment, we have placed him under suspension,” Reddy said.

The latest incident triggered an uproar in the lower house of parliament on Tuesday with several opposition parties demanding strict action against vigilante lynchings.

Many Hindus regard the cow as sacred, but India’s Muslim minority engages in the trade of cattle for slaughter and consumption, chiefly of buffalo meat, as well as dairy purposes.

A police investigation into the deadly attack is looking into allegations whether local police had also beaten Khan and delayed taking him to hospital, Alwar’s superintendent of police Rajendra Singh said.

“If there is any kind of lapse from the part of the police, we will take necessary legal action,” Singh told Reuters.

Police arrested three people in connection with the incident and are looking for a few more, Reddy said.

Cow vigilantism by pro-Hindu groups has surged in India since Prime Minister Narendra Modi’s Hindu nationalist Bharatiya Janata Party came to power in 2014, although most of the country’s 29 states have banned the killing of cows for meat.