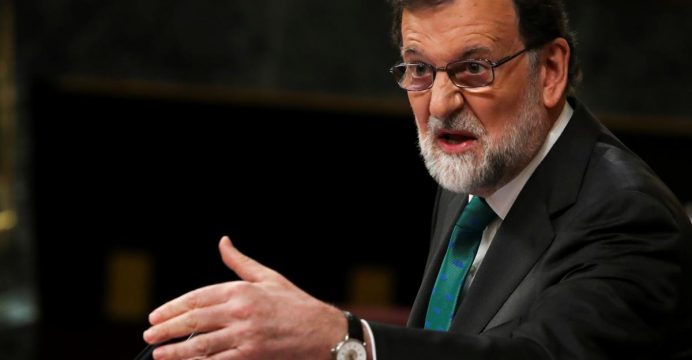 The future of Spain’s Prime Minister Mariano Rajoy hung in the balance on Thursday, with Socialist leader Pedro Sanchez a whisker away from forcing him out of office as a debate due to conclude with a no-confidence vote on Friday hotted up.

Sanchez, who told Rajoy he could still resign to avoid the humiliation of becoming the first Spanish Prime Minister to lose a no-confidence vote, will need an absolute majority of 176 votes on Friday to become the head of a new government.

“Are you ready to resign? Resign today and leave by your own will,” Sanchez told Rajoy. “You are part of the past, of a chapter the country is about to close,” he also said.

Information from various parties suggested he had already secured 175 and he was hoping to win over the Basque Nationalist Party (PNV), which has five parliamentary seats.

The PNV backed Rajoy’s budget as recently as last week but is considering removing its support after dozens of people linked to his People’s Party (PP) were sentenced to decades in prison in a long-running corruption trial.

Sanchez said he would stick to the budget approved by Rajoy if he won and would also seek to start a new dialogue with the restive region of Catalonia.

Defending his record on Thursday, Rajoy told deputies his centre-right PP has a wide majority of members who are “decent and honest.”

“The Socialists have left us with a ruined country and we brought back growth and jobs,” he said, adding that Sanchez was trying to put together a “Frankenstein” government that would damage the economy.

Two Catalan pro-independence parties as well as leftist Podemos, a relative newcomer, another small Basque group and a party from the Canary Islands have said they will back Sanchez.

The PNV party was due to make a final decision on whether to continue to back Rajoy during the afternoon, when its leadership holds an extraordinary meeting.