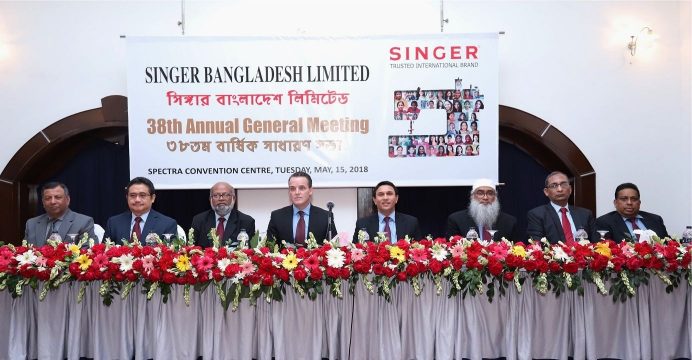 The 38th Annual General Meeting of SINGER Bangladesh Limited was held on May 15, 2018. The shareholders present in the meeting approved 100 percent cash dividend for the year 2017, which is 42.8% higher than last year.

The Company announced that SINGER contributed Tk. 318 crore to the National Exchequer in the form of corporate tax, customs duty and VAT during 2017. The meeting was attended by a large number of shareholders who made their valuable suggestions.

In the meantime, Singer Bangladesh Limited has announced a 66% increase in earnings per share for the quarter ended March 31, 2018.

Commenting on the Q1, 2018 results, Gavin Walker, Singer Bangladesh Chairman, noted, “We are very pleased to announce a 33% increase in turnover in Q1 2018, with higher gross margins and lower expenses ratios this translated into 79% increase in operating profit”.

Mr Walker added, “The Company has launched an exciting promotion to give away 1,000 LED televisions leading up to the FIFA World Cup. Soon after that the festival season will start with record sales anticipated in all categories”.