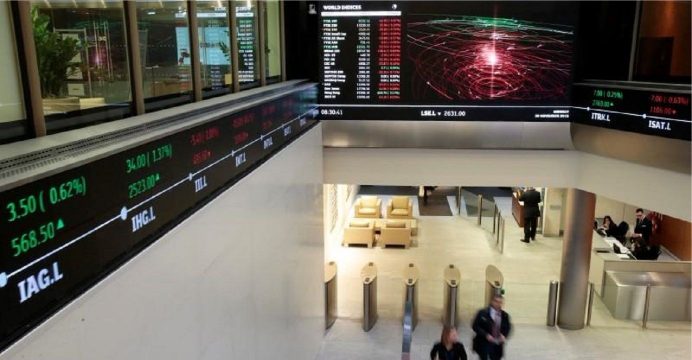 Wall Street deepened its already sharp losses on Friday as fears of a global trade war ate even further into global equities. Meanwhile, the dollar fell and crude oil shot above $70 per barrel in New York on the appointment of a hawkish US national security advisor.

Beijing responded to US President Donald Trump’s announcement on Thursday of levies on up to $60 billion of Chinese imports saying it was “not afraid of a trade war.” China also released a list of $3 billion worth of US goods, from pork to fruits and wine and including some steel and aluminum goods, that would be targeted with retaliation, reports BSS.

China would not rule out the possibility of slowing its purchases of US Treasuries — long a fear among US investors — as one method of retaliation. The news sent US stocks lower, with all three major indices in sell-off mode in the final moments of trading.

The Dow fell 1.8 percent, completing a 1,100 point drop over two days, while the S&P 500 and Nasdaq both lost more than two percent. By then, the news had already hammered stocks in Asia and Europe.

Schwab analysts noted China’s initial reaction to the US announcement was a “measured response,” and did not include aircraft or soybeans, key US exports.

But after the close, the analysts said the market was “quickly accelerating to the downside in the final hour of trading, as the potential ramifications of the recent tariffs imposed on China continued to weigh on investors’ minds.”

The brewing trade confrontation has fueled fears that a strong recovery in the world economy could be thrown off course as the tariffs crimp consumption and production.

Trade war fears sent many investors piling into the safe-haven yen. The dollar dropped below 105 yen for the first time since Trump was elected president in November 2016. The dollar also was down against the euro. Adding to the uncertainty was news that Trump’s national security advisor HR McMaster had been replaced by hawk John Bolton, a move that stunned much of Washington.

A vocal advocate of the Iraq War, Bolton has also championed pre-emptive strikes against North Korea and regime change in Iran — making him an outlier even among Republicans.

“The appointment of Mr. Bolton, who is no fan of the Iran nuclear deal, has prompted concern about renewed efforts to overturn the nuclear deal that has seen Iranian exports return to the market.”

Bolton’s arrival in the White House — the latest in a cascade of Trump’s staff changes — came just days after he replaced secretary of state Rex Tillerson with another Iran hawk, CIA director Mike Pompeo.