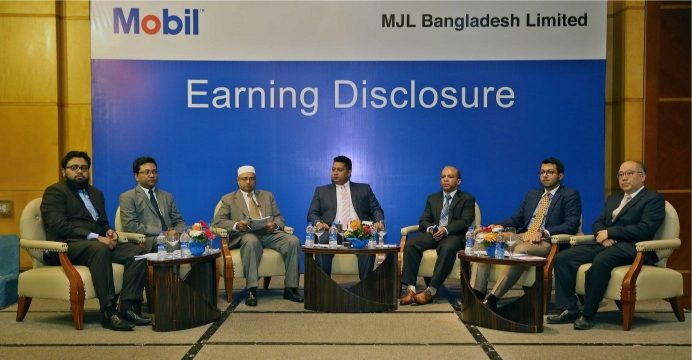 MJLBL is the first Bangladeshi company owning two such Aframax tankers in the private sector of Bangladesh.

Mr. Hossain also echoed that MJLBL is the first Bangladeshi company owning two such Aframax tankers in the private sector of Bangladesh. He also highlighted on the challenges lubricants industry is encountering with and the counteract measures taken by MJLBL to mitigate those risks.

Sabbir Ahmed, FCA, Head of Finance & Planning of MJLBL said that they delivered a strong business performance with an 8.71% growth in manufacturing unit to reach BDT 1,067 million in the second quarter of 2017-18. The revenue of trading unit soared by 6.80% to reach BDT 1,017 million for the same period. The revenue of the oil tanker unit plunged by 79.04%, as it remained laid up for two months due to regulatory periodic maintenance (dry docking), which has to be done twice in every five years.

“The drop in revenue of oil tanker weakened both profits after tax and EPS of MJLBL by 32.56% to reach BDT 287 million and BDT 95 paisa respectively in the second quarter of 2017-18,” added Mr. Ahmed.

He also echoed that the dent in oil tanker revenue was partially neutralized due to splendid 83% revenue growth of Omera Petroleum Limited (OPL), making the consolidated EPS nearer to the previous reporting period.

However, MJLBL management is very much optimistic to recover the performance in the remaining parts of this financial year.

Mr. Chowdhury also emphasized on the potential of untapped LPG segment of Bangladesh along with the upcoming expansion plan of Omera Petroleum Limited & Omera Cylinders Limited to grab those opportunities.

Mr. Tanjil Chowdhury, Director of MJLBL emphasized on the downstream synergies emanated from the subsidiaries, associates and sister concern of MJLBL. Mr. Chowdhury also highlighted on the core competencies of MJLBL, OPL, OCL, and OGL along with the initiatives taken to capitalize unexploited markets of Bangladesh.