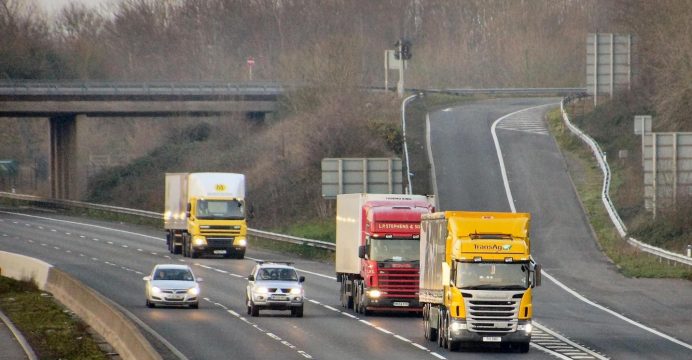 The government is considering a “pay-per-mile” scheme for lorries to cover the cost of damage to UK roads.

Transport Secretary Chris Grayling confirmed the current HGV levy, used to pay for wear and tear on the road network, was being consulted on.

Critics say the current scheme means international drivers using the roads do not have to pay towards upkeep.

But the Road Haulage Association (RHA) said it was unfair to target lorries and it needs to see more detail.

Mr Grayling denied any plans for a road toll system for other vehicles for the “foreseeable future”.

Speaking on BBC Radio 4’s Today programme, the minister said it was about creating a “level playing field” for British and international hauliers.

“Our hauliers often complain that a continental trucker comes in with a tank full of lower duty diesel, spends several days working in the country, goes away again and pays nothing towards the use of the roads,” he said.

“We already have a system in place that provides some limited contribution, but we’re now consulting the industry.”

But a spokesman for the RHA said he was “worried” about the announcement.

“Although it’s good news that more money is being spent on roads, it’s not right to target only lorries with a new tax,” he said.

“This has to be revenue neutral for lorry firms. If we fail to do this, it will make us less competitive than our European counterparts.”

The news came as the government launched a separate consultation to find out which A-roads in England needed cash to bring them up to scratch.

The Department for Transport announced funding in the summer to rejuvenate the road network, but is now asking councils to apply for up to £100m for projects.

About 5,000 miles of A-roads across the country will be eligible for the multi-billion pound funding pot to improve the nation’s strategic road network.