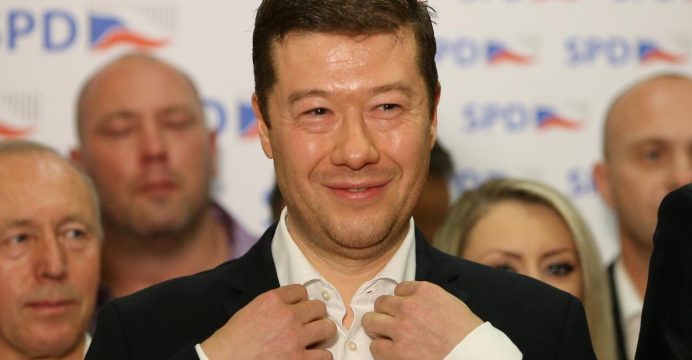 A far-right party whose leader wants to quit the EU and urged Czechs to walk pigs near mosques and stop eating kebabs, performed surprisingly well in an election, potentially giving it a chance to influence how the next government is formed.

The Freedom and Direct Democracy (SPD) party rode a wave of far-right sentiment in Europe in an election that ravaged the more established political parties and looked set to hand power to maverick tycoon Andrej Babis.

The SPD was set up in 2015 by Tomio Okamura, a half-Japanese entrepreneur who made his name by creating an off-beat travel agency for cuddly toys before entering politics.

“We want to stop any Islamisation of the Czech Republic, we push for zero tolerance of migration,” Okamura told reporters after his party won just under 10.7 percent of the vote, almost neck-and-neck with two other parties who were runners-up to Babis’s ANO party.

Okamura was first elected to the lower house for the Dawn party, which fought to install direct voting for most political posts and won 6.9 percent in the 2013 election, He was later ousted in a spat over irregularities in party finances.

This time around, Okamura pounced on anti-foreigner feeling that has soared in the nation of 10.6 million, despite record-low unemployment, growing wages and relatively little immigration.

“I voted for SPD because their opinions are close to mine, I am also against migrants arriving here,” said Pavel, an unemployed worker, leaving a polling station in Prague.

Okamura has also played on euroscepticism among many voters and attacked the Roma minority.

“The European Union can’t be reformed. It only dictates to us. We refuse the multicultural European superstate. Let’s leave the EU,” Okamura said at a party leaders’ debate just before polls opened on Friday.