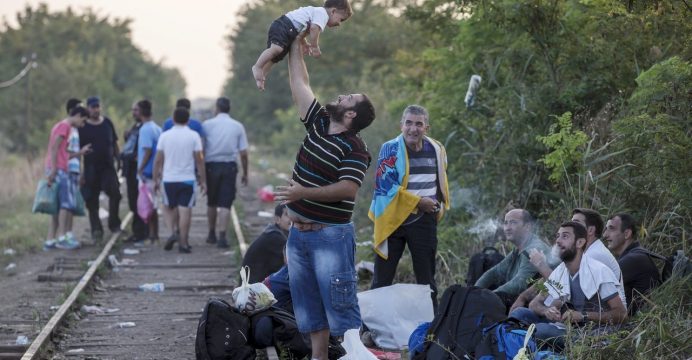 A migrant, hoping to cross into Hungary, plays with a child along a railway track outside the village of Horgos in Serbia, towards the border it shares with Hungary, August 31, 2015. REUTERS/Marko Djurica
News
Oct 6, 2017 News Hour Correspondent -

Hungarian villagers in backlash against holiday for migrants

Zoltan Fenyvesi’s offer to host migrants for a free holiday in his guest house set off a backlash in this southern Hungarian village. His van’s tires were slashed and angry locals railed against him. He says there was even a death threat.

The controversy also triggered the resignation of the long-time mayor of Ocseny, a quiet village nestled among swathes of farmland 160 kilometers (100 miles) south of Budapest, as well as national debate about Hungarians’ tolerance levels.

As right-wing Prime Minister Viktor Orban gears up for an election in April that he is widely expected to win, this four-bedroom guesthouse, just across the street from an elementary school and a Catholic church, has become an unlikely flash point for anti-migrant sentiment.

Orban has taken a hard line on immigration which has included a barbed-wire fence on Hungary’s southern border and tough laws criticized by human rights groups. He has also referred to the importance of maintaining “ethnic homogeneity”.

The measures have kept out migrants and shored up support for his Fidesz party since 2015 when at the peak of the crisis hundreds of thousands of migrants from the Middle East crossed Hungary on their way to western Europe.

Billboard campaigns, television ads and questionnaires sent to Hungarians to bolster Orban’s platform have contributed to a surge in anti-migrant sentiment to record levels according to a survey by Tarki, a think-tank.

Last week’s town hall meeting in Ocseny to discuss Fenyvesi’s offer, raised jointly with Migration Aid, a group set up to help migrants, descended into angry shouting and locals voicing fears of violence and robbery if migrants showed up.

“Who can guarantee that the little boys and girls will not be harmed, like we heard of in other countries?” shouted a middle-aged woman in footage taken at the scene by local media.

“Who will protect you if they sneak into your property at night and beat you to death?” she said.