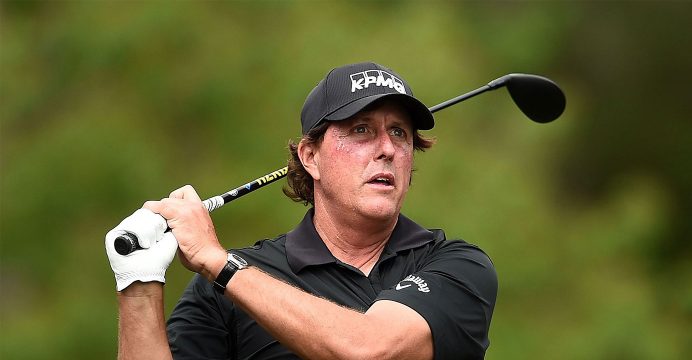 With 12 Presidents Cups and 23 US match play appearances under his belt, Phil Mickelson knows what matters.

The five-time major champion drained a 12-foot birdie putt at the 18th to seal a 1-up win with Kevin Kisner over Jason Day and Marc Leishman on Friday as the US roared to a six-point Presidents Cup lead over the International team.

The US duo celebrated with an awkward, hip-thrusting “Three Amigos” dance.

A day after taking a selfie that barely included himself with former presidents Barack Obama, George W. Bush and Bill Clinton, Mickelson was unapologetic.

US captain Steve Stricker had seen the dance rehearsal and had misgivings about what was coming.

“Phil is Phil,” Stricker said, adding that he knew a missed putt to win a match on Thursday had been “eating at” Mickelson overnight.

“He just can’t believe he missed that putt yesterday,” Stricker said. “It’s nice to see that he got a little redemption on that last green and made that putt.”

Mickelson’s 24th win in Presidents Cup play tied Tiger Woods’ record. Woods, an assistant to US captain Steve Stricker, was at the 18th green to see it.

“The record, I don’t really think much about,” Mickelson said. I just love every opportunity to be a part of these events and these teams.”

Including Ryder Cup play, he’s been on 23. But the 47-year-old says they aren’t getting any easier.

“I was nervous throughout the entire match,” Mickelson said. “But the first three or four holes I was really nervous. I always am.

“I told Kisner to feel free to say something, because I’m feeling the pressure. I’m certainly feeling it.

“I played a little tight early on. I don’t care how many of these I’ve played in, I feel more and more pressure as the years go by, because I cherish them so much.”