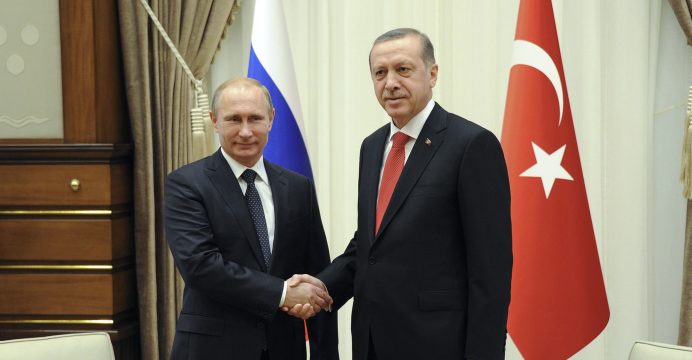 Putin heads to Turkey for talks on weapons deal, Syria

Russian President Vladimir Putin on Thursday meets his Turkish counterpart Recep Tayyip Erdogan for talks on Syria and a key weapons deal, hoping to strengthen an increasingly active relationship that has troubled the West.

Despite a regional rivalry that goes back to the Ottoman Empire and the Romanov dynasty, Russia and Turkey have been working closely since a 2016 reconciliation ended a crisis caused by the shooting down of a Russian war plane over Syria.

“Russia and Turkey are cooperating very tightly,” Putin’s spokesman Dmitry Peskov said ahead of the one-day working visit by Putin to Ankara.

Both Moscow and Ankara are pushing for the creation of four “de-escalation zones” in Syria to end the civil war that has raged since 2011. Meanwhile, Turkey, a NATO member, has signed a deal reportedly worth $2 billion to buy S-400 air defence systems from Russia, a move that has shocked its allies in the alliance.

But while Putin and Erdogan are at pains to project an increasingly productive relationship, a shadow could be cast by Monday’s independence referendum in Iraqi Kurdistan, which enraged Ankara but which Moscow stopped short of condemning.

Turkey and Russia have been on opposing sides during the more than six years of war in Syria, with Russia the key backer of President Bashar al-Assad and Turkey supporting rebels seeking his ouster.

But while Turkey’s policy is officially unchanged, Ankara has notably cooled its attacks on the Damascus regime since its cooperation with Russia began to heat up.

Economic cooperation is also beginning to flourish, with Russian tourists returning to Turkey and the two countries working on a Black Sea gas pipeline.