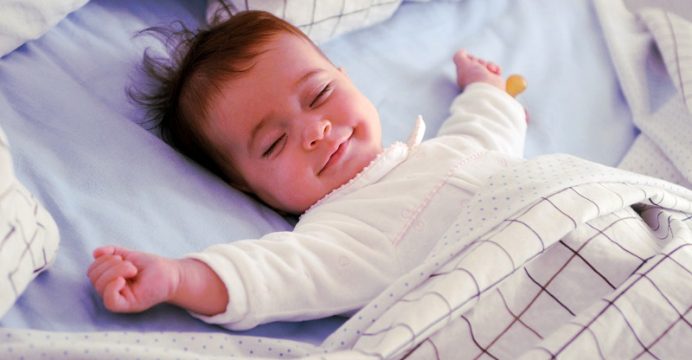 Parents who put babies to sleep in their own rooms report the infants get more rest and have more consistent bedtime routines than parents who share a room or a bed with their babies, a recent study suggests.

The study focused on infants 6 to 12 months old. Researchers examined data from a questionnaire completed by parents of 6,236 infants in the U.S. and 3,798 babies in an international sample from Australia, Brazil, Canada, Great Britain and New Zealand. All participants were users of a publicly available smartphone app for baby sleep, reports Reuters.

Overall, about 37% of the babies in the U.S. and 48% in the international sample slept in a separate room, the study found. In both groups, parents of infants who slept in a different room reported that babies had earlier bedtimes, took less time to fall asleep, got a total sleep over the course of 24 hours, and spent more time asleep at night.

“There are a number of possible reasons that babies sleep better in their own room,” said lead study author Jodi Mindell, associate director of the Sleep Center at the Children’s Hospital of Philadelphia.

“One main reason is that they are more likely to self-soothe to sleep,” Mindell said.

Parents who put babies to sleep in a separate room were less likely to feed infants to help them fall asleep at bedtime or when they awoke during the night, according to the study, published online August 11 in Sleep Medicine.

When babies had their own rooms, parents also perceived bedtime to be less difficult. One limitation of the study is that parents with concerns about infant sleep might be more likely to download an app and complete a sleep questionnaire than parents without these concerns, the authors note. This might mean the results aren’t representative of what would happen in a larger population of households.

The results are also at odds with infant sleep recommendations. Last year, the American Academy of Pediatrics (AAP) issued new guidelines recommending newborns sleep in the same bedroom as their parents for at least the first six months of their lives to minimize the risk of sleep-related deaths. Ideally, babies should stay in their parents’ rooms at night for a full year, AAP advised.

That’s because of babies sleeping in the same room as parents, but not the same bed, may have a lower risk of sudden infant death syndrome (SIDS). The safest spot for infant sleep is on a firm surface such as a crib or bassinet without any soft bedding, bumpers or pillows, the guidelines stressed.

“Pediatric providers have been struggling with what to tell parents since the release of the AAP recommendations,” Mindell said. “Once a baby is past the risk of SIDS, by 6 months of age, parents need to decide what works best for them and their family, which enables everyone in the family to get the sleep they need.”

The recommendations target the highest-risk period for SIDS, from birth to 6 months, but these deaths can also occur in older babies that were the focus of the study, said Dr. Lori Feldman-Winter, a co-author of the AAP guidelines and pediatrics researcher at Cooper Medical School of Rowan University in Camden, New Jersey.

“If the only goal is to increase sleep, then the results may be compelling,” Feldman-Winter said by email. “However, since we don’t know what causes SIDS and evidence supports room sharing as a method to decrease SIDS, giving up some sleep time may be worth it.”