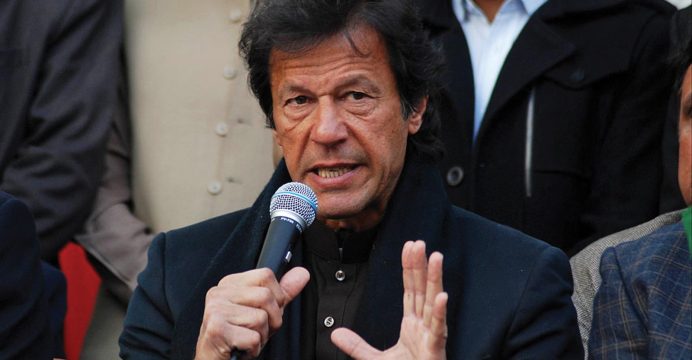 Imran Khan looks to take the job, after campaign to oust Pakistan PM

As Pakistani cricket star-turned-politician Imran Khan prepared for a victory rally to celebrate the success of his campaign to remove Prime Minister Nawaz Sharif from office, he said his aim was to take the job himself next year.

Khan wants to ride the momentum of his drive against Sharif to win the 2018 general election, more than 20 years after he entered politics, reports Reuters.

“We will contest the elections and I’m confident we will win the elections,” Khan, 64, told Reuters late on Saturday.

He dismissed his own pending Supreme Court case investigating unreported assets as a political vendetta and vowed his future government would focus not on big infrastructure projects but on development for the poor.

On Friday, the Supreme Court disqualified Sharif from office on the grounds he did not report a nominal monthly salary from his son’s Dubai-based company, money the prime minister says he never received.

Khan spearheaded demands for an investigation on Sharif after the leaking of the Panama Papers, which revealed his family had bought expensive London apartments through offshore companies.

In the end, the Panama Papers-related allegations were not the basis for Sharif’s dismissal, but Khan’s threat to paralyze the capital with street protests last year led to the court investigation into the premier’s finances.

Analysts are divided, however, on whether Khan’s recent win, combined with charisma and a populist pitch, is enough to defeat the political machine of Sharif’s Pakistan Muslim League-Nawaz (PML-N) party in elections.

For all the furor over Sharif’s ouster, the immediate balance of political power in Pakistani is unchanged.

The PML-N hold a healthy majority of 188 seats in the 342-member parliament, and it is expected to swiftly install an interim prime minister on Tuesday and later elect Sharif’s younger brother, Shahbaz, as leader.

“For time being, Imran has gained,” political analyst Hasan Askari said. “He has an advantage, but we have to see whether he can sustain this advantage and convert it into votes.”