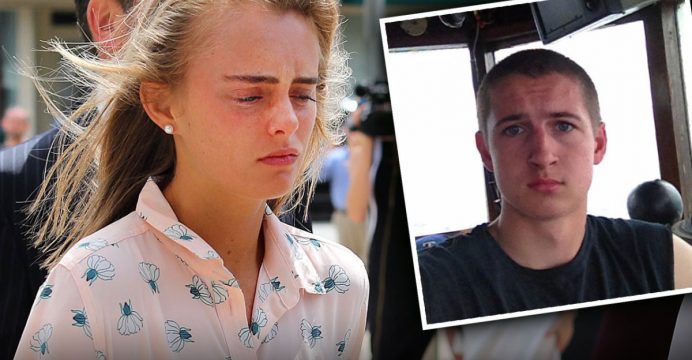 Girl found guilty of demanding boyfriend to kill himself

Michelle Carter, the young woman who told her boyfriend over 40 times to commit suicide before he eventually did, has today been found guilty of involuntary manslaughter.

Crying in court, Carter was told by Judge Lawrence Moniz that the messages she sent to her boyfriend, Conrad Roy III, were not only immoral but illegal, reports New York Times.

In a decision which most legal experts were not expecting, the verdict found Carter guilty meaning that a person’s words alone can directly result in death.

Back in July 2014, Carter who was 17 at the time, called her boyfriend, 18, and told him to kill himself. Shortly afterwards Roy placed a pump through his window omitting carbon monoxide.

Shortly afterwards he got out of the vehicle feeling violently ill and spoke to Carter over the phone who urged him to ‘get back in’.

Conrad was found dead in the cab of his truck the day after.

Though the reasoning behind her despicable actions will never be known, the prosecutor claimed she did it to be viewed as the ‘grieving girlfriend’.

Speaking of the above actions, Judge Moniz said:

She admits in subsequent texts that she did nothing, she did not call the police or Mr. Roy’s family and finally, she did not issue a simple additional instruction: ‘Get out of the truck.’

This court, having reviewed the evidence, finds you guilty on the indictment with involuntary manslaughter.

Carter is thought to be sentenced on August 3.

If the prosecution is successful, Carter could be subject to a 20-year sentence, putting her behind bars until the age of 40.