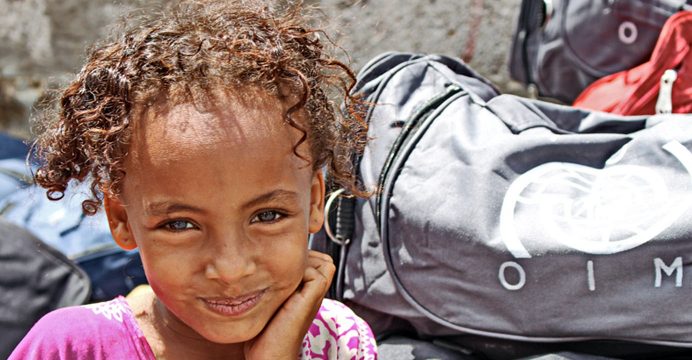 Natural disasters and pre-existing economic fragility are escalating the humanitarian crisis in Yemen. The UN Migration Agency (IOM) is working with communities in Yemen to help them better prepare for or prevent future disasters, while also carrying out its emergency response, early recovery, and stabilization activities.

Displaced persons and affected communities in Yemen continue to face increased insecurity, limited freedom of movement, restricted access to services (shelter, food, water, health and education) and a lack of livelihood opportunities. Torrential rains and flash floods triggered by two rainy seasons, March to May and July to October, have the potential to be devastating, compounding the damage caused by storms throughout the year.

“We need to be ready to support the population rendered more vulnerable by these natural catastrophes, in addition to the difficulties they are already experiencing in a country in conflict,” said IOM Yemen Chief of Mission Laurent De Boeck. “Without an effective early warning system, Yemenis will continue to suffer the impact of flooding and other natural disasters,” he continued.

Globally, IOM leads the response to human displacement triggered by natural disasters. IOM has developed a strategy and response plan to provide fast life-saving support to victims of natural disasters in Yemen, through the provision of relief items and the implementation of an early warning system. These plans have been developed to complement IOM’s humanitarian emergency response to the ongoing conflict.

The agency similarly supported natural disaster-affected populations in Yemen in 2008, when a tropical storm devastated the Governorate of Hadramaut. Approximately 180 people died and 20,000 people were displaced. In 2010, heavy rains hit the capital, Sana’a, killing nine people and damaging houses in the old city, a UNESCO World Heritage Site.

IOM will provide and store relief items in strategic locations in flood-prone governorates across the country. This will enable IOM and its partners to reduce the time it takes to reach the most vulnerable communities during natural disasters. The development of the strategy and response plan was funded by the Yemen Humanitarian Pooled Fund (YHPF).