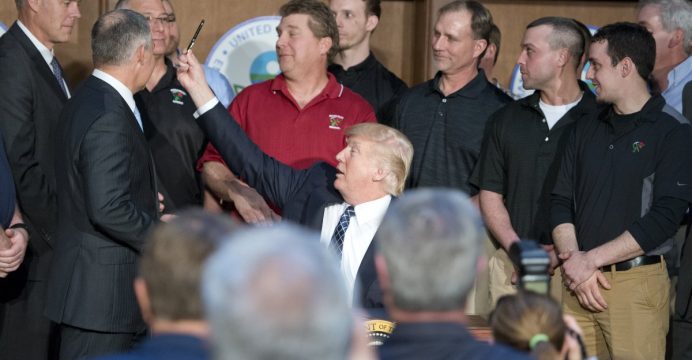 Lawmakers, lobbyists and interest groups are making a final push in their fight over regulations enacted during former President Barack Obama’s last months in office, with the financial services industry working hard to kill a rule on retirement plans run by states.

The deadline for introducing any new CRA resolutions on regulations enacted under Obama was nearly a month ago, and Republicans are working to complete resolutions already in the legislative pipeline before the third week of May.

Currently, the resolutions only require simple majorities to pass both houses of Congress to reach President Donald Trump for signing. After May 11, they must win 60 votes in the Senate to pass, a steep hurdle, given voting margins on CRA resolutions have been tight and Vice President Mike Pence had to break a tie on one.

A spokeswoman for Speaker Paul Ryan said the House of Representatives will probably not have any more CRA votes, after on Thursday approving a resolution repealing a transportation rule.

The resolution on state-run retirement plans has been caught in limbo for weeks. Obama’s Labor Department had exempted both state and city-run retirement plans from the 1974 Employee Retirement Income Security Act, or ERISA, a law designed to protect workers’ savings with detailed compliance requirements.

Private-sector workers whose employers do not offer 401(k) or other retirement benefits, and who often have low incomes, are automatically enrolled in plans being launched in some states, such as California and Illinois. States say the exemption lets employers pass workers’ money into plans without footing compliance costs.

States are farther along than cities in establishing the programs, with cities still in the drafting stages. On March 30, the Senate approved a resolution already passed in the House killing the exemption for city programs. Trump signed it in mid-April.

Voting on a near identical resolution on states’ programs was expected to follow immediately, but so far the measure has not come to the floor.