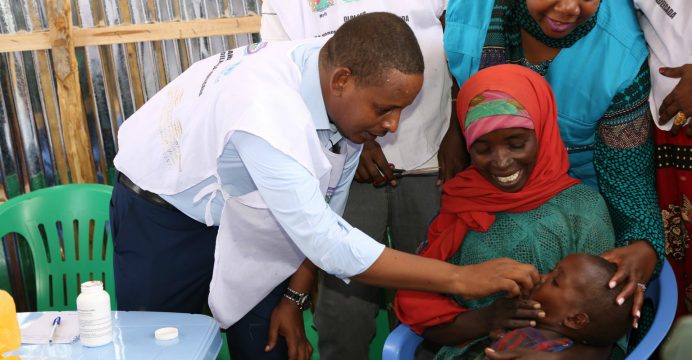 Almost 30,000 young children, many of them displaced by a searing drought, are being vaccinated against measles this week in an emergency campaign in Baidoa, a town at the heart of one of Somalia’s hardest-hit areas.

Many of the children have never been immunized before – they come from remote areas health workers often cannot reach because of a decades-old conflict that has ravaged the impoverished country in the Horn of Africa.

So far this year, almost 5,700 cases of suspected measles have been reported across the country, more than the total number of cases in 2016. Measles, a viral respiratory infection that spreads through air and contact with infected mucus and saliva, thrives in congested, unsanitary displacement camps, which have mushroomed across the town and surrounding areas. More than 100,000 people have come to Baidoa in search of assistance, including at least 70,000 in March alone.

On 24 April 2017, (center) a mother gives her child a deworming tablet mixed with water at Beerta Muuri camp in Baidoa during the measles vaccination campaign launch * PHOTO CREDIT – UNICEF

“Among vaccine-preventable diseases, none is more deadly than measles,” said Steven Lauwerier, UNICEF’s Representative in Somalia.

“And we know only too well from the 2011 famine that measles, combined with malnutrition and displacement, is an especially lethal combination for children.”

The threat of famine once again looms large over Somalia. Over half the population is acutely food insecure, water-borne and infectious diseases like cholera and measles are spreading, and up to a million children are, or will be acutely malnourished this year, with one in five requiring life-saving treatment.

The Baidoa campaign is part of an effort to vaccinate about 110,000 displaced children below 5 years old in hotspots across south central Somalia, plus 250,000 children in Somaliland, against the deadly contagious disease, by the end of May. Conducted in partnership with the Ministry of Health, WHO, and several non-governmental organizations, it also includes a vitamin A supplement to boost immunity as well as de-worming tablets.