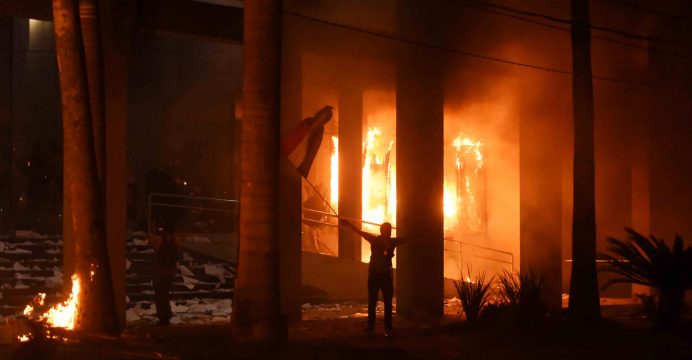 A protester was killed in Paraguay after violent clashes overnight sparked by a secret Senate vote for a constitutional amendment that would allow President Horacio Cartes to run for re-election.

Activists were seen arriving in Paraguay’s capital on Saturday from the landlocked country’s interior in a sign the protests that resulted in the country’s Congress being stormed and set alight may go on, reports Reuters.

Firefighters managed to control the flames on the building’s first floor on Friday, although thousands of protesters rioted in other parts of Asuncion and elsewhere in the country into the early hours of Saturday.

Rodrigo Quintana, 25, was killed by a rubber bullet fired by police at the headquarters of a liberal youth activist group, the Paraguayan opposition said.

The Interior Ministry said in a statement an investigation would be opened into Quintana’s death. His doctor said he had suffered a severe head injury.

Around 200 protesters were detained, police said, and shops and government buildings were vandalized.

Several politicians and journalists were injured, local media reported, and Interior Minister Tadeo Rojas said several police were hurt. One member of the lower house of Congress, who had been participating in protests that afternoon, underwent surgery after also being hit by rubber bullets. 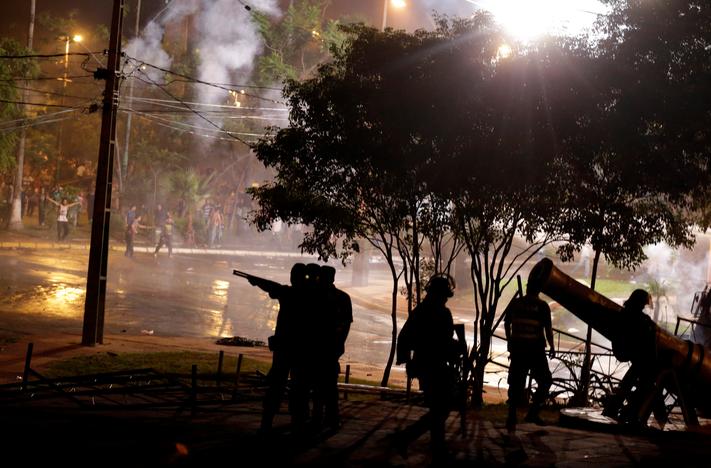 Prosecutors and lawmakers were reviewing damage to the Congress on Saturday.

Meetings for the Inter-American Development Bank’s (IADB) annual board of governors went ahead as scheduled in a rare high-level international event in Paraguay.

IADB President Luis Alberto Moreno called for peace and dialogue and said Paraguay would continue to be a vital partner of the regional bank.

While Paraguay has long suffered from political uncertainty, the soy- and beef-exporting country has attracted investment in agriculture and manufacturing sectors in recent years as Cartes offered tax breaks to foreign investors.

“We are saddened by what is happening, but it’s the usual politics,” Lea Gimenez, Paraguay’s vice minister for economic affairs, told investors and journalists during a panel discussion.

Instability in the country of 6.8 million is a concern for its much larger neighbors Brazil and Argentina.

The region is already worried about unrest in Venezuela, where President Maduro on Saturday moved to quell protests and international condemnation. The pro-government Supreme Court revoked its controversial annulment of the opposition-led congress.