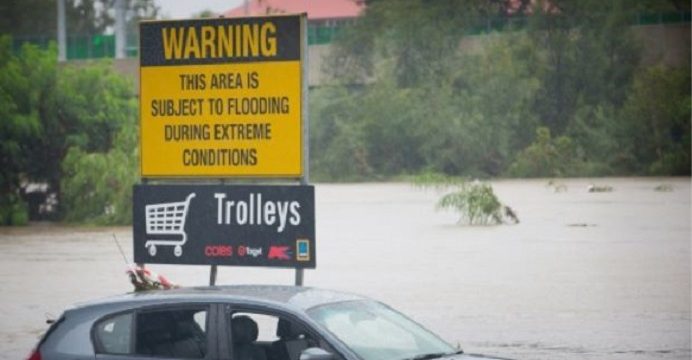 Tens of thousands of people have been evacuated from towns in two Australian states as authorities warned on Friday there could be deaths from severe flooding caused by the ex-tropical cyclone.

Debbie was downgraded to a tropical low as it tracked southeast but continued to pack damaging gusts and dump huge amounts of rain all the way down the eastern coast of New South Wales state, south of Queensland, and Sydney.

Lismore near the NSW coast was hard hit, with the State Emergency Service (SES) warning of three-metre (9.8-feet) high flood levels in the town.

“Overnight we had about 130 flood rescues, most of which services were unable to get to. So… as we start to go out and try to find people that made those calls overnight, there could be some very distressing news,” SES acting Deputy Commissioner Mark Morrow told the Australian Broadcasting Corporation.

“There could be people overnight that perished in that flood, we don’t know at this stage.”

Other towns subject to evacuation orders include Tweed Heads, Kingscliff, and Murwillumbah. Further north in Queensland, the popular tourist city of Gold Coast and other nearby regions were also inundated by water.

Bureau of Meteorology regional director Bruce Gunn said there had been a widespread rain of between 100-300mm falls over the last two days in southeast Queensland where the Gold Coast is located.

“In terms of what happened in the last 24 or 48 hours, we have seen some pretty big rainfall totals,” he told Brisbane’s Courier Mail.

“There is still that strong risk around the Gold Coast.”

In the areas hit by Debbie, including Bowen, Mackay and the Whitsundays, mobilized some 50,000 people were still without power, Queensland officials said.

The mil immobilized 1,300 soldiers to help assess the full extent of damage and aid the clean-up, with helicopters and planes deploying to restore infrastructure and supply emergency food, water and fuel.