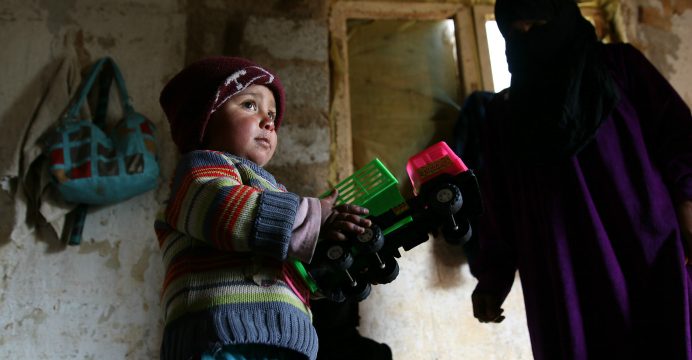 Grave violations against children in Syria were the highest on record in 2016, said UNICEF in a grim assessment of the conflict’s impact on children, as the war reaches six years.

Verified instances of killing, maiming and recruitment of children increased sharply last year in a drastic escalation of violence across the country.

• At least 652 children were killed – a 20 per cent increase from 2015 – making 2016 the worst year for Syria’s children since the formal verification of child casualties began in 2014.
• 255 children were killed in or near a school.
• More than 850 children were recruited to fight in the conflict, more than double the number recruited in 2015. Children are being used and recruited to fight directly on the frontlines and are increasingly taking part in combat roles, including in extreme cases as executioners, suicide bombers or prison guards.
• There were at least 338 attacks against hospitals and medical personnel .

“The depth of suffering is unprecedented. Millions of children in Syria come under attack on a daily basis, their lives turned upside down,” said Geert Cappelaere, UNICEF Regional Director for the Middle East and North Africa speaking from Homs, Syria.

“Each and every child is scarred for life with horrific consequences on their health, well-being and future.” 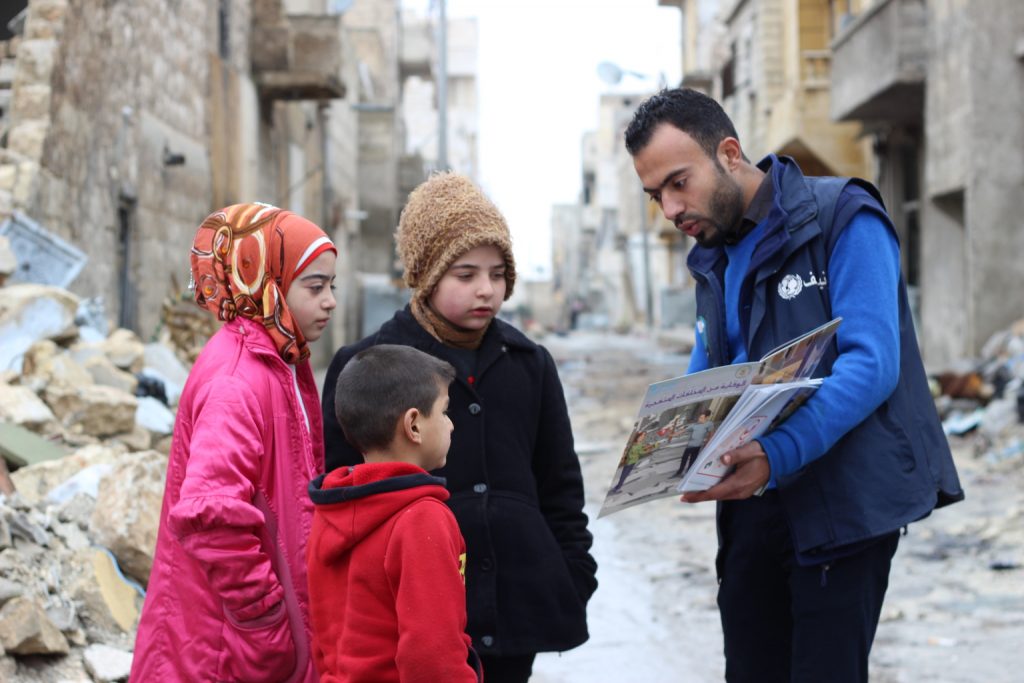 On 16 January 2017 in the Syrian Arab Republic, Mohammad (right) is a volunteer with the risk education campaign * PHOTO CREDIT – UNICEF

Challenges in access in several parts of Syria stand in the way of assessing the full scale of children’s suffering and of urgently getting humanitarian assistance to the most vulnerable girls and boys. Beyond the bombs, bullets and explosions, children are dying in silence often from diseases that can otherwise be easily prevented. Access to medical care, lifesaving supplies and other basic services remains difficult.

The most vulnerable among Syria’s children are the 2.8 million in hard-to-reach areas, including 280,000 children living under siege, almost completely cut off from humanitarian aid.

After six years of war, nearly 6 million children now depend on humanitarian assistance, a twelve-fold increase from 2012. Millions of children have been displaced, some up to seven times. Over 2.3 million children are now living as refugees in Turkey, Lebanon, Jordan, Egypt and Iraq.

Inside Syria and across its borders, coping mechanisms are eroding, and families are taking extreme measures just to survive, often pushing children into early marriage and child labour. In more than two thirds of households, children are working to support their families, some in extremely harsh conditions unfit even for adults.

Yet despite the horrors and suffering, there are many remarkable stories of children determined to pursue their hopes and aspirations. Darsy (12), now a refugee in Turkey said: “I want to be a surgeon to help the sick and injured people of Syria. I dream of a Syria without a war so we can go home. I dream of a world without any wars.”

“We continue to witness the courage of Syria’s children. Many have crossed frontlines just to sit for school exams. They insist on learning, including in underground schools. There is so much more we can and should do to turn the tide for Syria’s children,” said Cappelaere.

On behalf of the children of Syria, UNICEF is appealing to all parties to the conflict, those who have influence over them, the international community and anyone who cares about children for:

• An immediate political solution to end the conflict in Syria;
• An end to all grave violations against children including killing, maiming and recruitment, and attacks on schools and hospitals;
• The lifting of all sieges and unconditional and sustained access to all children in need, wherever they are in Syria;
• Providing refugee host governments and communities with sustainable support for vulnerable children, regardless of their status, and
• Continued financial support for UNICEF’s lifesaving assistance to Syrian children.