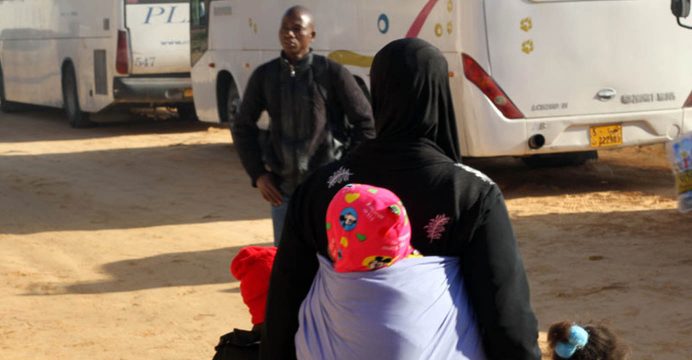 IOM Libya’s Christine Petré reported 37 of the migrants had been released from the Triq Al Sekka detention centre prior to their departure. Others were longer-term residents of Tripoli, having journeyed to Libya in search of work years – or in some cases, decades – before Libya’s current spate of violence, which began in 2011.

Many of the returnees from the suburbs of Tripoli stayed in the Malian Embassy in Tripoli for one night prior to departure.

Seydou*, 21, said: “I can’t express my happiness to return to my home country and continue my university education. I came to Libya to go to Europe – on the death boats – but I realized that this path leads to hell and I will never think about [doing] it again.”

Another of the returnees was 63-year-old Oumar*. He came to Libya 30 years ago, leaving his wife and children behind to earn money to send back. Today Oumar’s children are grown – with families of their own and Oumar’s grandchildren, whom he has never seen.

“There has been no work or money in Libya for the last three years and I didn’t get paid for a year and a half now,” Oumar explained. “That is why I have decided to go back to Mali and die among my family members.”

Twenty-year-old Aminata* came to Libya with her husband and one-year-old son. But when her husband left her, she had trouble finding work – especially after refusing to work illegally. Desperate, she eventually learned about IOM’s Assisted Voluntary Return and Reintegration (AVRR) programme.

Thirty-year-old Fatou*, a mother of three, came to Libya looking for her husband, who had left Libya for Europe. Left alone and unable to earn enough money to follow her husband to Europe, she also decided to return voluntarily return home with IOM.

One of the returnees was an unaccompanied child. IOM’s protection unit traced his family and once back in Mali, IOM Mali staff will escort him back to his parents in a village outside Bamako.

IOM’s AVRR efforts in Libya are funded by the UK Foreign Office, the EU’s Instrument contributing to Stability and Peace (IcSP) and the US government.

The charter flight – which was coordinated with Libyan and Malian authorities – departed Tripoli’s Mitiga airport. IOM provided pre-departure interviews, medical check-ups and other assistance, including clothing and shoes.