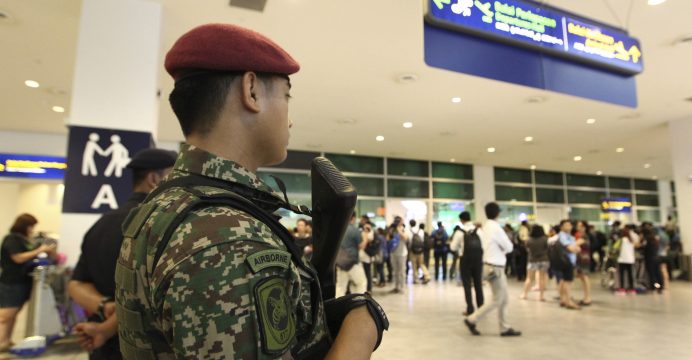 South Korean intelligence believes suspects wanted for the murder of the half-brother of North Korea’s leader included several officials who worked for the reclusive state’s foreign and security ministries, according to lawmakers in Seoul.

Kim Jong Nam was killed earlier this month at a Malaysian airport by assassins using VX nerve agent, a chemical capable of killing in minutes and listed by the United Nations as a weapon of mass destruction, reports Reuters.

South Korea is acutely sensitive to developments in its unpredictable nuclear-armed neighbor, and intelligence agency officials have briefed lawmakers on the sensational killing of the estranged half-brother of the North’s leader Kim Jong Un.

North Korea has not acknowledged the victim is Kim Jong Nam. But South Korean and U.S. officials believe Kim, who had criticized his family’s control of the isolated state, was assassinated by agents of the North.

“Among eight suspects in this case four are from the ministry of state security and two who actually took action are from the foreign ministry,” Lee Cheol-woo, one of the lawmakers briefed by South Korean intelligence, told reporters.

“That is why it is a case of terrorism led by the state, directly organized by the ministry of state security and the foreign ministry,” Lee added.

Malaysian police have identified a total of eight North Koreans as suspects or as wanted for questioning. These include a North Korean embassy official believed to still be in Kuala Lumpur.

Malaysia’s health minister Subramaniam Sathasivam said on Sunday that Kim Jong Nam died within 15-20 minutes of being assaulted by two women who are believed to have smeared VX on his face.

He had been at Kuala Lumpur International airport to catch a flight to Macau, the Chinese territory where he had been living under Beijing’s protection.

The women, Indonesian and Vietnamese citizens, are in police custody and have told officials from their respective embassies that they believed they were taking part in a TV prank.

Another South Korean lawmaker briefed by the intelligence agency, Kim Byung-kee, said the North Koreans had operated in three teams.

Two teams, each including officials from both North Korea’s state security and foreign ministries, were responsible for hiring women in Indonesia and Vietnam and bringing them to Malaysia to carry out the attack. The third team provided “support”.

He said South Korean intelligence said the North’s embassy official in Kuala Lumpur, Hyon Kwang Song, was linked to the state security ministry and part of the support team.

Malaysian police have said they may issue an arrest warrant for the diplomat if he does not cooperate, but it is unclear if they can do so given he has diplomatic immunity.