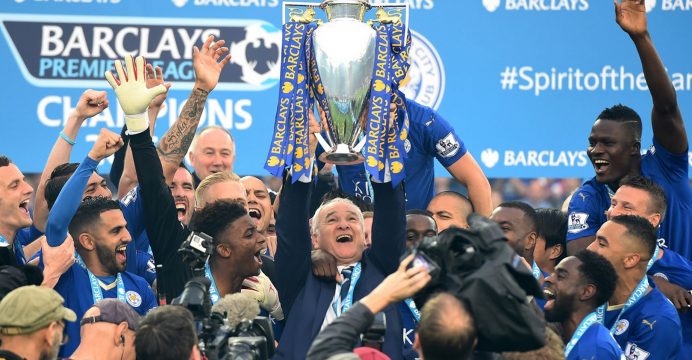 Manager Claudio Ranieri has been sacked by Leicester City, nine months after leading them to the Premier League title.

The Foxes are one point above the relegation zone with 13 matches left.

“The board reluctantly feels that a change of leadership, while admittedly painful, is necessary in the club’s greatest interest,” read a statement, reports Reuters.

Ranieri, 65, guided the Foxes to the title despite them being rated 5,000-1 shots at the start of the campaign.

His departure comes less than 24 hours after a 2-1 defeat at Spanish side Sevilla in the first leg of their Champions League last-16 tie.

The Foxes took the Premier League title by 10 points but have won just five top-flight games this season, and could become the first defending champions to be relegated since 1938.

They have lost their past five league matches and are the only side in the top four English divisions without a league goal in 2017.

“His status as the most successful Leicester City manager of all time is without question,” added the Foxes statement.

“However, domestic results in the current campaign have placed the club’s Premier League status under threat.”

Earlier this month, Leicester gave their “unwavering support” to the Italian, who was appointed manager in July 2015 and signed a new four-year deal in August 2016.

“After all that Claudio Ranieri has done for Leicester City, to sack him now is inexplicable, unforgivable and gut-wrenchingly sad,” said former Foxes striker Gary Lineker.

BBC sports editor Dan Roan said: “Ranieri was told he was sacked on Thursday afternoon in Leicester once the team returned from Spain, but the suggestion is the owners decided before that defeat by Sevilla.

“The decision was taken very reluctantly but the club’s owners are desperate to avoid relegation and its consequences.

“A news conference with assistant manager Craig Shakespeare will take place at the stadium at 13:00 GMT on Friday.”