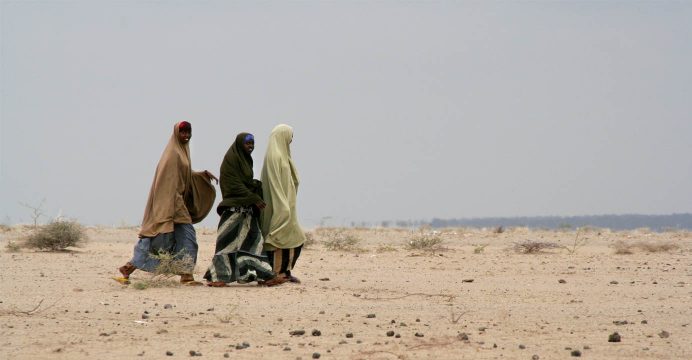 A failed 2016 rainy season linked to the climate phenomenon La Niña, combined with exceptionally warm sea surface temperatures in the western Pacific and eastern Indian Oceans, have led to extreme drought in the Horn of Africa and a more intense drought than that of 2010 in Somalia. These extreme weather conditions, combined with factors including high food prices, trade disruption, population displacement and insecurity, are likely to have a very severe impact on the food security of millions of people in the coming months. This expected food crisis could be exacerbated by a forecast poor rainfall season in 2017.

In a joint statement issued today, which contributes to the global report on food crises being prepared in the context of the Global Network against Food Crises, the European Commission’s Joint Research Centre (JRC), the Famine Early Warning Systems Network (FEWS NET), the Food and Agriculture Organization of the United Nations (FAO) and the United Nations World Food Programme (WFP) have expressed their concern about the impact of this recent and persistent drought in Somalia and neighbouring countries.

The drought is already producing severe water and pasture shortages in pastoral regions, and severe loss of livestock and reduced milk production in the north of Somalia.
The dry January to March ’Jilaal’ season is expected to further deteriorate the food security situation, as shown by the Food Security and Nutrition Analysis Unit – Somalia (FSNAU) and FEWS NET countrywide seasonal assessment (conducted in December 2016 and made public on 2 February 2017), which finds that more than 2.9 million people will likely face Crisis and Emergency food security conditions until June 2017.

This drought is part of a wider-scale event that includes central, coastal and northern Kenya, southern Ethiopia and, to a lesser degree, other areas of the Greater Horn of Africa. Kenya has declared the drought a ‘national disaster,’ and the governments of both Kenya and Ethiopia note that several million people in each country will require food, nutrition and livelihood support in the coming months.

Unfortunately analyses of the latest seasonal weather forecasts for the next ‘Gu’ rainfall season (from March to May 2017), which is usually the most productive season of the year, converge towards a pessimistic preview. There is growing consensus among climate scientists about a significant likelihood of below-average rainfall, especially during the first half of the season. Consequently, another potentially poor harvest at the outset of the long dry season could extend into October 2017.

The implications of this third consecutive drier-than-average rainfall season are bleak and in a county weakened by over 20 years of civil conflict and affected by major access problems for aid interventions may easily lead to a humanitarian disaster on the scale observed in 2010-2011. Very large numbers of people could require urgent humanitarian assistance, with the most vulnerable populations in the worst-affected areas facing an increased risk of famine.

Therefore, the joint statement calls on humanitarian partners to urgently prepare themselves to scale up their interventions in response to food-insecurity levels and food-insecure population figures in Somalia and neighbouring regions, which are likely to be at their highest levels since the 2010-2011 disaster. High-priority interventions include the provision of urgent and substantial food assistance, the updating of emergency response for agro-pastoral communities, the continued close monitoring of the weather forecast and the raising of awareness about the need for a regional approach to address the crisis.