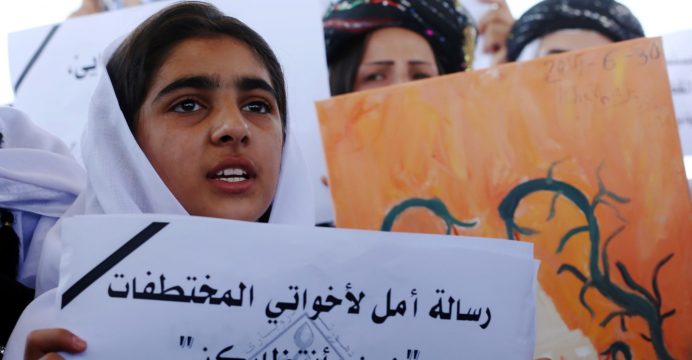 President Donald Trump prepared to host Israeli Prime Minister Benjamin Netanyahu on Wednesday for talks that could shape the contours of future Middle East policy, as Palestinians warned the White House not to abandon their goal of an independent state.

For decades, the idea of creating a Palestine living peacefully alongside Israel has been a bedrock U.S. position, though the last negotiations broke down in 2014, reports Reuters.

But in a potential shift, a senior White House official said on Tuesday that peace did not necessarily have to entail Palestinian statehood, and Trump would not try to “dictate” a solution.

As Trump and Netanyahu prepared to meet, a senior Palestinian official disclosed that on Tuesday, CIA director Mike Pompeo held talks with Palestinian President Mahmoud Abbas in Ramallah, the seat of the Palestinian government in the occupied West Bank, reports Reuters.

“(It was) the first official meeting with a high-profile member of the American administration since Trump took office,” said the official, who spoke on condition of anonymity and declined to disclose details of the discussion.

Netanyahu committed, with conditions, to the two-state goal in a speech in 2009 and has broadly reiterated the aim since. But he has also spoken of a “state minus” option, suggesting he could offer the Palestinians deep-seated autonomy and the trappings of statehood without full sovereignty.

Palestinians reacted with alarm to the possibility that Washington might ditch its support for an independent Palestinian nation.

“If the Trump Administration rejects this policy it would be destroying the chances for peace and undermining American interests, standing and credibility abroad,” Hanan Ashrawi, a senior member of the Palestine Liberation Organization, said in response to the U.S. official’s remarks.