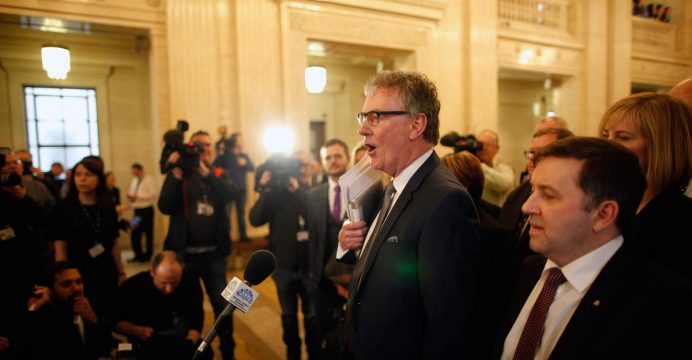 Irish Prime Minister Enda Kenny’s party fell 11 percentage points behind its main rival, a poll showed on Sunday, ahead of a proposed no confidence motion over his minority government’s handling of a policing controversy.

Kenny’s Fine Gael fell two points to 21 percent and fellow centrist party Fianna Fail rose three to 32 percent, according to the Sunday Times/Behaviour & Attitudes poll. The 11-point gap is by far the biggest margin of any recent polling.

Kenny’s minority administration relies on the cooperation of Fianna Fail to govern and their “confidence and supply” deal will be tested by a no confidence motion due to be laid down by left wing party Sinn Fein, which was at 19 percent in the poll.

However, a Fianna Fail frontbench spokesman said on Twitter that the party would not be guided by polls and would “put the national interest first.” Sunday’s survey was largely conducted before the policing controversy which has dominated local media since.

The “confidence and supply” arrangement is due to last until late next year.

Sinn Fein said on Saturday that it would table the motion “without delay”, citing the manner in which the government has handled an alleged media campaign by the chief and former chief of police to damage a high profile whistleblower.

The government established a judge-led inquiry into the allegations on Wednesday, which will include the examination of police commissioner Noirin O’Sullivan’s mobile phone records. She has faced calls from some opposition parties to stand down.

Kenny is considering widening the terms to include potential collusion between police and the state’s child protection agency over a clerical error at the agency that led to false sex abuse allegations being made against the whistleblower.

The government came under pressure from opposition parties, including Fianna Fail, after one minister said that she knew about the error but had not told cabinet colleagues as they agreed the inquiry’s original terms of reference.