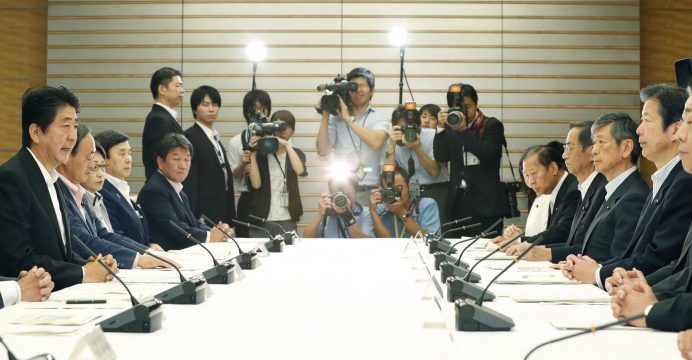 Prime Minister Shinzo Abe heads to Washington on Thursday hoping promises to help create U.S. jobs and bolster Japan’s military will persuade U.S. President Donald Trump to turn down the heat on trade and currency and stand by the decades-old alliance.

Japanese officials have been soothed by security assurances from Defense Secretary Jim Mattis and others. But they worry Trump may go off script when the two leaders meet, first for a summit in Washington on Friday and then for a round of golf near the “Winter White House” in Florida , reports Reuters.

Some in Tokyo even worry that Trump, a global businessman and author of “The Art of the Deal”, might eventually make some sort of pact with rival China that leaves Japan out in the cold.

“What we want to know is Mr. Trump’s attitude towards China,” said Yukio Okamoto, a former Japanese diplomat with ties to the government. “If it becomes only an economic one, then a deal might be made at some point without the consideration of security issues in the region.”

Japanese politicians are also concerned that Abe might make hard-to-keep promises when the two play a round of golf that has echoes of one between Abe’s prime minister grandfather, Nobusuke Kishi, and President Dwight Eisenhower in 1957.

U.S. newspapers then dubbed the golf game a “triumph of diplomacy” between the former World War Two enemies. Three years later, Kishi had to resign because of a public furor over the 1960 U.S.-Japan security pact.

“The symbolism of playing golf is very important to the Japanese,” said Dennis Wilder, a former National Security Council official. “Abe is very proud of his grandfather and has worked hard to fulfill his unrealized dream of building a full strategic partnership with Washington.”

During his election campaign, Trump complained that Tokyo and Seoul were not sharing enough of the cost of the U.S. security umbrella.

Trump has also lumped Japan with China and Mexico as big contributors to the U.S. trade deficit, targeted its auto trade as “unfair” and accused Tokyo of using monetary policy to devalue its currency to boost exports.

Japan posted a trade surplus of 6.8 trillion yen with the United States last year, down 4.6 percent from 2015, but U.S.-bound car shipments rose for a second straight year, ministry of finance data showed month.

Abe, who will be accompanied by Finance Minister Taro Aso and Foreign Minister Fumio Kishida, will bring a package of steps Tokyo says could create 700,000 U.S. jobs through private-public investment in infrastructure such as high-speed trains, government sources say.

Speculation is also simmering that Japanese manufacturers like Toyota Motor Corp, whose president Akio Toyoda met Abe last week, could time announcements about investment – either already planned or new – to coincide with the summit.

Japanese display maker Sharp Corp may start building a $7 billion plant in the United States this year, a person with knowledge of the plan said on Wednesday.

Hoping to update what Japan believes is Trump’s outdated image of Japan forged in decades-old trade wars, Abe will also be armed with data, showing, for example, that Japanese firms are the biggest direct foreign investor and foreign employer in the United States second only to Britain.