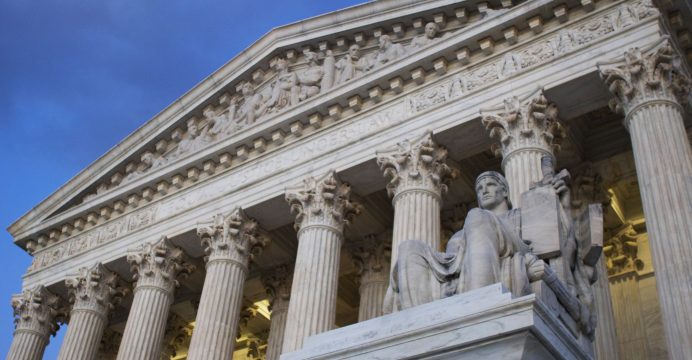 President Donald Trump said he will announce his nominee to the U.S. Supreme Court on Tuesday as he looks to quickly put his stamp on the court by restoring its conservative majority, even as Democrats geared up for a Senate confirmation fight.

Trump, set to fill the lingering vacancy on the nation’s highest court left by the death of conservative Justice Antonin Scalia in February 2016, said on Monday he will reveal his choice at the White House at 8 p.m. on Tuesday (0100 GMT on Wednesday), two days earlier than previously planned, reports Reuters.

Since Scalia’s death, the Supreme Court has been ideologically split with four conservatives and four liberals. Another conservative justice could be pivotal in cases involving abortion, gun, religious and transgender rights, the death penalty and other contentious matters.

Trump’s appointee to the lifetime post could face stiff opposition from Democrats in the Republican-led U.S. Senate, which must confirm nominees to the high court. Some liberal groups have urged Democrats to do everything possible to block Trump’s nominee.

“This is the seat that Mitch McConnell and team have stolen from President Obama. I won’t be complicit in this theft,” Merkley said in a statement. “We need to fight this Constitution-shredding gambit with everything we’ve got.”

On the Senate floor, McConnell had words of warning for Democrats, saying senators should respect Trump’s election victory and give the nominee “careful consideration followed by an up-or-down vote,” not a filibuster.

Trump, who took office on Jan. 20, said last week he would favor Senate Republicans eliminating the filibuster, a move dubbed the “nuclear option,” for Supreme Court nominees if Democrats block his pick.

White House spokesman Sean Spicer said of Democratic opposition: “It’s all about politics. It’s not about qualifications. The president has a right to have his nominees taken up.”

While not identifying the nominee, Spicer referred to the pick as “he” and said the selection came from the list of about 20 jurists recommended by conservative legal groups.

Senate Democratic leader Chuck Schumer said this month it is hard to imagine Trump picking a nominee who Democrats could support, adding he would “absolutely” fight to keep the seat vacant rather than let the Senate confirm a nominee deemed to be outside the mainstream.