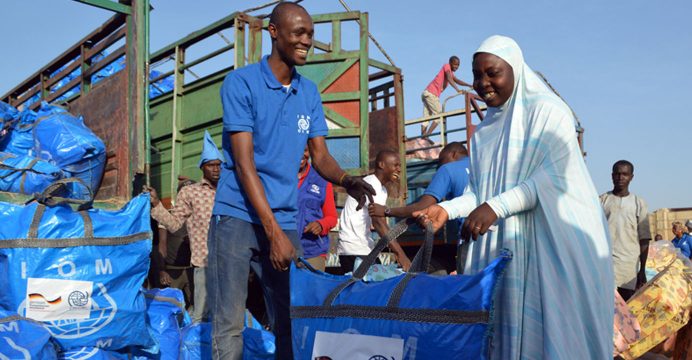 IOM has provided mattresses, blankets, water purification tablets, mosquito nets and other essential items to 12,500 displaced families (70,073 individuals) and others affected by Boko Haram violence in Adamawa, Borno, and Yobe states, north-eastern Nigeria, over the last six weeks. Many fled their homes, leaving everything behind, to escape Boko Haram or lost their belongings when villages were razed around the northeast.

“I left my home five days ago to come to Konduga, 30km away in Borno,” explained Yazara Abba, 65. “After three years of Boko Haram controlling us, the military came and we were able to escape. I brought all that I could carry for my grandkids: a mosquito net, one shirt and a plastic container,” she said, unwrapping the small bundle, her hands and feet scraped from the long walk.

Yazara’s family of five is among the 500 families (2,653 people) that received household items from IOM in Konduga on Sunday. IOM has already built shelters for 614 families (approximately 4,298 people) in the town and plans to provide shelters for another 500 families there in the coming weeks.

Internally displaced families in camps and host communities in 23 locations in Adamawa, Borno and Yobe also received floor mats, buckets, jerry cans, pots, cooking utensils, cutlery, plates, soap, detergent, and sanitary pads. Many of the beneficiaries are in hard-to-reach areas that only recently became accessible to humanitarian workers, thanks to improving security.

These items, and blankets in particular, surpass food as the greatest “unmet need” of 15 percent of the internally displaced persons (IDPs) surveyed in IOM’s last Displacement Tracking Matrix, published in December 2016. From January to November 2016, IOM distributed 19,726 household (NFI) kits, supporting about 106,445 individuals.

“Giving these critical items to more than 70,000 people in under two months reflects our growing capacity to respond to this humanitarian crisis,” said Fouad Diab, Emergency Coordinator at IOM Nigeria. “We have scaled up our response, doubling the size of our NFI distribution team, and we look forward to doing more to address the increasing needs of the many Nigerians affected by the conflict.” The programme is funded by the Government of Germany.