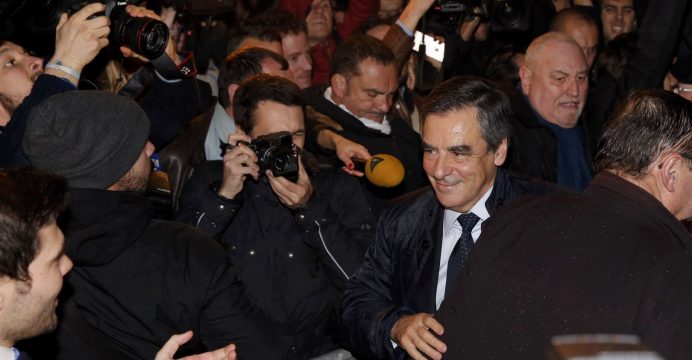 French presidential election frontrunner Francois Fillon said on Wednesday that he was outraged at a press report that his wife had been paid for work she did not do, describing it as proof of a “stinkbomb” campaign against him.

The satirical weekly Le Canard Enchaine reported that Penelope Fillon had been paid 600,000 euros ($644,700) for employment as a parliamentary assistant to him and later to his replacement as a National Assembly lawmaker, and for work at a cultural journal, though there was no evidence she had ever really worked, reports Reuters.

It is not illegal for French parliamentarians to employ a family member in their office, but the allegation that his British-born wife was paid for fake work – a charge to which Fillon did not reply directly – could hurt his campaign as the race for the presidency gathers pace.

“I am outraged by the contempt and the misogyny of this article,” Fillon, a former conservative prime minister who is running for The Republicans party in the presidential election on April 23 and May 7, told journalists in the city of Bordeaux.

“I see the stinkbomb season has started,” the 62-year-old said.

While Fillon is favourite to win the election in May, he will face a strong challenge from the far-right leader Marine Le Pen and possibly from independent centrist Emmanuel Macron.

Earlier on Wednesday, Bruno Le Roux, the Socialist interior minister, said the allegation was a serious one which required an explanation from Fillon.

Socialist former prime minister Manuel Valls, who also hopes to win his party’s ticket as presidential candidate, urged Fillon to explain himself on the matter.

“You can’t be the candidate of honesty and transparency and not respond,” Valls told France Inter radio.