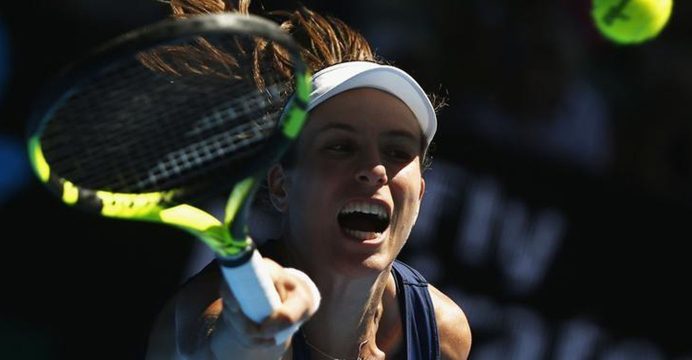 Johanna Konta bowed out of the Australian Open on Wednesday, taking British hopes of a first women’s grand slam singles champion in 40 years with her, but the ninth seed said her defeat to Serena Williams had been the experience of a lifetime.

The American world number two put down the challenge of the in-form Briton 6-2 6-3 in an hour and 15 minutes to deny Konta a repeat of last year’s foray into the last four.

“I think it was probably one of the best experiences of my life,” said the 25-year-old after the quarter-final defeat.

Red-eyed and sniffly-nosed, Sydney-born Konta was still upbeat about her overall performance, and consoled herself that losing to the 22-times grand slam champion was hardly a unique experience.

“Credit to her, she played an almost perfect first set. I felt she really did incredibly well. She just showed why she is who she is,” she said.

“I definitely would have liked to have had a bit more say in the match than I did. But unfortunately that’s also so much to do with Serena herself, the kind of tennis that she plays.

“I don’t think there’s one player on tour that goes up against her and feels like they’ve got much of a say in the matches.”

In the end, she said, there was little she could do to counter an extra decade of experience, and conceded that perhaps playing such a formidable opponent had weighed on her mind more than she had realised.

“Whether I was going to win or lose, I just wanted to compete well. So I think I may have put a little too much expectation and pressure on myself, and not given enough credit to the situation,” she said.

“But also her in the way she’s able to handle those situations, just because her experience and my experience are not exactly on par.”

Konta had been trying to become Britain’s first women’s grand slam singles champion since Virginia Wade won Wimbledon in 1977. When she was told Williams had described her as a “future champion,” a grin broke out across the Briton’s face.

“That’s nice,” she said laughing. “I will do my best. I will try. Hopefully I’ll get the chance to play her again and do better.”