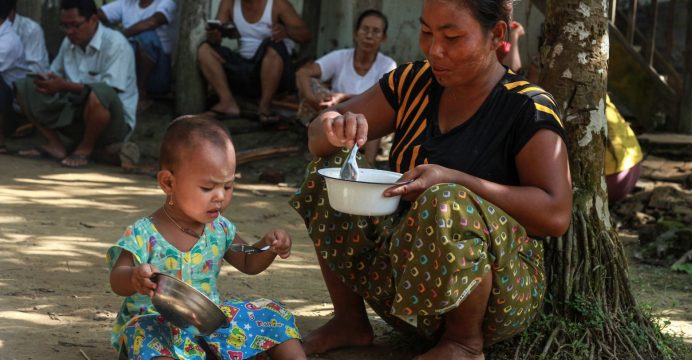 A man has been found dead with stab wounds in Myanmar’s Rakhine State, in what the government said on Monday was the second murder in under a week of a Rohingya who cooperated with authorities as they crack down on suspected insurgents.

State media has reported at least 86 deaths and the United Nations says 34,000 people have fled to Bangladesh, reports Reuters. The violence poses a challenge to Aung San Suu Kyi’s government and has renewed international criticism that the Nobel laureate has done too little to help the Rohingya, who are denied citizenship in Myanmar.

Residents and rights groups say soldiers have raped Rohingya women, burnt homes and killed civilians during the operation near the frontier with Bangladesh.

The government denies the accusations, and has launched a social media campaign in an effort to demonstrate that security forces are acting properly in Rakhine.

He said the killing of the 28-year-old Muslim might be “related to terrorism”.

Myanmar’s state counselor’s office said on Monday evening on its Facebook page that the victim had been “cooperating with members of security forces in administration duties.”

The case is the second murder in Rakhine where authorities have highlighted the victim’s cooperation with the government, appearing to point the finger at Rohingya insurgents.

On Friday, the state counselor’s office said a Muslim man was decapitated after he had denied stories of Myanmar military abuse when speaking to reporters.

“He told media that there was no case of arson by the military and police forces, no rape and no unjust arrests,” said a Facebook post accompanied by a picture of a headless body with English text that read: “truth teller beheaded”.