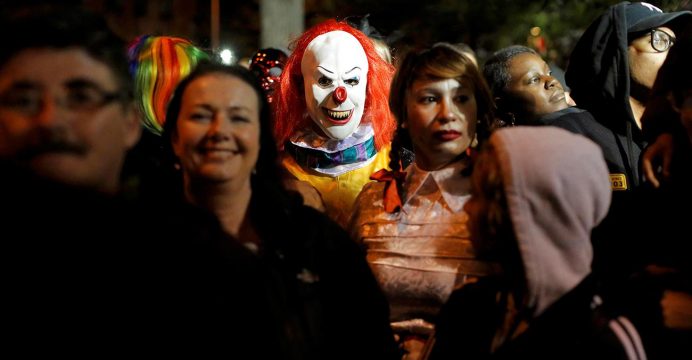 Searches for selfies led to many bad decisions, an outbreak of creepy clown sightings chilled even horror maestro Stephen King, and a hard-fought campaign ended with the election of former reality TV star Donald Trump as president of the United States.

Along with moments of triumph and tragedy, 2016 brought stories that ranged from weird to wonderful, funny to flummoxing.

New York’s Museum of Modern Art rolled out an exhibit of emojis this month. In September, the Satanic Temple, which says it promotes separation of church and state rather than devil worship, found a new home in Salem, Massachusetts, best known for the 17th-century witch trials.

A man visiting New York in October sparked an evacuation of the city’s Metropolitan Opera when he sprinkled the cremated remains of his mentor, an opera aficionado, into the orchestra pit.

One common theme among the strangest stories was that access to a camera and a desire for attention was a recipe for bad ideas.

A Texas teen in October crashed her vehicle into the back of a police car while trying to take a topless photo of herself.

“I asked her why she was not dressed while driving,” the arresting officer wrote in an affidavit. “She stated she was taking a Snapchat photo to send to her boyfriend.”

In April, a California man was sentenced to 20 years in prison for setting one of the state’s worst wildfires after filming himself surrounded by the flames.

Courts ruled that the First Amendment of the U.S. Constitution protects the right of voters in states including New Hampshire and Michigan to take selfies with their filled-in ballots.

The debut of Nintendo’s Pokemon GO mobile-phone game, which sends players hunting for imaginary monsters on public streets, brought a wave of complaints, notably in July when a pair of obsessed teens accidentally but illegally crossed the border from Canada into Montana.

A spate of summertime sightings of creepy clowns lurking near playgrounds, standing alone in the rain or allegedly living in previously abandoned cabins in woods around Greenville, South Carolina, led to a series of strange stories.

The alleged sightings spread north and caused panicked passersby to chase some pranksters. By Halloween, school principals were warning students not to show up in clown costumes.

The stories unnerved even author Stephen King, whose dozens of spine-chilling novels include “It,” the tale of a supernatural being that appears as a clown.