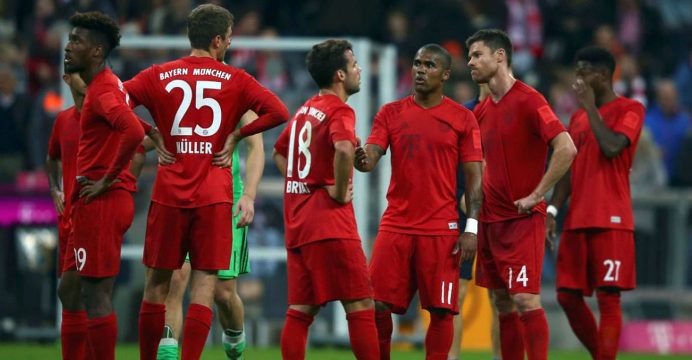 Bayern Munich face an acid test of their status as Bundesliga leaders in Wednesday’s crunch showdown when they host second-placed RB Leipzig, who know they have nothing to lose.

The Bavarian giants have won the Bundesliga title at a canter in each of the last four seasons, but Leipzig, who were only founded in 2009, have torn up the form book in their first season in Germany’s top flight.

Just like Bayern, they have won 11 of their 15 league games, with three wins and a single defeat.

Both clubs have 36 points, but Munich are top on goal difference.

A shock 1-0 defeat to Ingolstadt ten days ago is the only blot on Leipzig’s record having so far beaten the likes of Dortmund, Leverkusen, Schalke and now Hertha Berlin, following Saturday’s 2-0 home win.

“Quick, compact and greedy — they are the best opponent we have faced so far,” was Hertha coach Pal Dardai’s appraisal of Leipzig, who had gone a record 13 matches unbeaten at the start of their debut Bundesliga season.

The Bundesliga breaks for winter after this round of mid-week matches and the Allianz Arena showdown is the standout tie.

Having led for three weeks until early December, Leipzig knocked Bayern off the summit for 24 hours after their impressive win over Hertha before Munich’s 1-0 victory at bottom side Darmstadt put them top again on Sunday.

“We’re proud to have a game on Wednesday against Bayern Munich which will electrify the whole of Germany and will certainly inspire across the borders,” said Leipzig’s Austrian coach Ralph Hasenhuettl.

RB are one of the few German clubs who have deep pockets like Bayern with the financial weight of Austrian drinks giants Red Bull behind them.

Their team has an average age of just over 23 and there is little fear ahead of their historic first Bundesliga match against Bayern.

“We want to, we can, but we don’t have to,” said defender Stefan Ilsanker when asked about the pressure to win in Munich.

Leipzig are set to be without injured defensive midfielder Naby Keita (thigh) and defender Marcel Halstenberg (hip), but Leipzig’s young guns are relishing the test of their mettle.