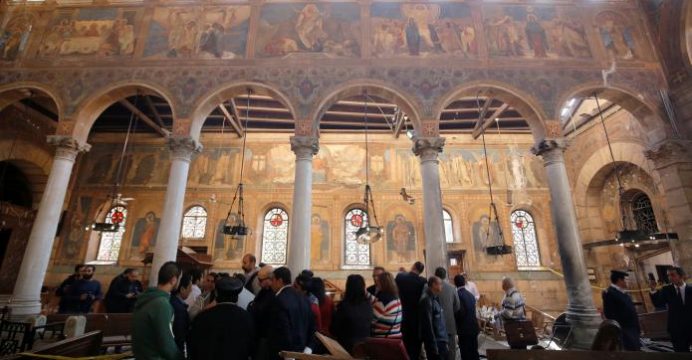 A bombing at Cairo’s largest Coptic cathedral killed at least 25 people and wounded 49, many of them women and children attending Sunday mass, in the deadliest attack on Egypt’s Christian minority in years.

The attack comes as President Abdel Fattah al-Sisi fights battles on several fronts. His economic reforms have angered the poor, a bloody crackdown on the Muslim Brotherhood has seen thousands jailed, whilst an insurgency rages in Northern Sinai, led by the Egyptian branch of Islamic State, reports Reuters.

The militant group has also carried out deadly attacks in Cairo and has urged its supporters to launch attacks around the world in recent weeks as it goes on the defensive in its Iraqi and Syrian strongholds. 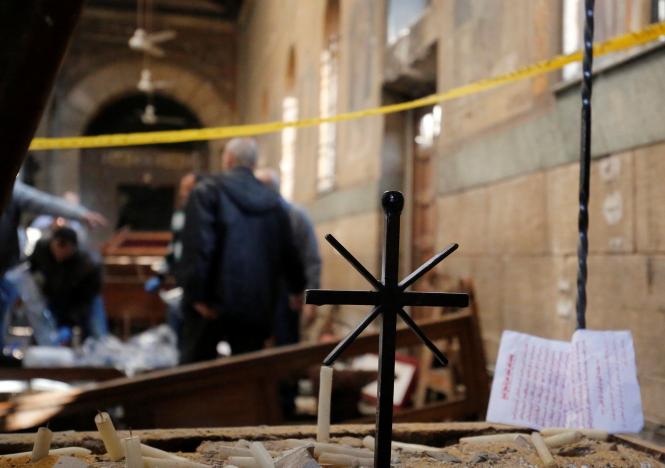 There was no immediate claim of responsibility, but exiled Brotherhood officials and home-grown militant groups condemned the attack. Islamic State supporters celebrated on social media.

“God bless the person who did this blessed act,” wrote one supporter on Telegram.

The explosion took place in a chapel, which adjoins St Mark’s, Cairo’s main cathedral and the seat of Coptic Pope Tawadros II, where security is normally tight.

The United States said it “will continue to work with its partners to defeat such terrorist acts” and that it was committed to Egypt’s security, according to a White House statement on Sunday.

The UN Security Council urged “all States, in accordance with their obligations under international law and relevant Security Council resolutions, to cooperate actively with all relevant authorities” to hold those responsible accountable.

At the Vatican, Pope Francis condemned what he called the latest in a series of “brutal terrorist attacks” and said he was praying for the dead and wounded.

The chapel’s floor was covered in debris from shattered windows, its wooden pews blasted apart, its pillars blackened. Here and there lay abandoned shoes and sticky patches of blood.

“As soon as the priest called us to prepare for prayer, the explosion happened,” Emad Shoukry, who was inside when the blast took place, told reporters.

“The explosion shook the place … the dust covered the hall and I was looking for the door, although I couldn’t see anything … I managed to leave in the middle of screams and there were a lot of people thrown on the ground.”

Security sources told Reuters at least six children were among the dead, with the blast detonating on the side of the church normally used by women. They said the explosion was caused by a device containing at least 12 kg (26 pounds) of TNT.

Police and armored vehicles rushed to the area, as hundreds of protesters gathered outside the compound demanding revenge for the attack that took place on a Muslim holiday marking the Prophet Mohammad’s birthday and weeks before Christmas. Scuffles broke out with police.

A woman sitting near the cathedral in traditional long robes shouted, “kill them, kill the terrorists, what are you waiting for? … Why are you leaving them to bomb our homes?”

Though Egypt’s Coptic Christians have traditionally been supporters of the government, angry crowds turned their ire against Sisi, saying his government had failed to protect them.

“As long as Egyptian blood is cheap, down, down with any president,” they chanted. Others chanted “the people demand the fall of the regime”, the rallying cry of the 2011 uprising that helped end Hosni Mubarak’s 30-year rule.

Copts face regular attack by Muslim neighbors, who burn their homes and churches in poor rural areas, usually in anger over an inter-faith romance or the construction of church.

The last major attack on a church took place as worshippers left a New Year’s service in Alexandria weeks before the start of the 2011 uprising. At least 21 people were killed.

The attack came two days after six police were killed in two bomb attacks, one of them claimed by Hasm, a recently-emerged group the government says is linked to the Brotherhood, which has been banned under Sisi as a terrorist organization.

The Brotherhood says it is peaceful. Several exiled Brotherhood officials condemned the bombing, as did Hasm and Liwaa’ al-Thawra, another local militant group.

Coptic Pope Tawadros II cut short a visit to Greece after learning of the attack. In a speech aired on state television, he said “the whole situation needs us all to be disciplined as much as possible … strong unity is the most important thing.”

Church officials said earlier on Sunday they would not allow the bombing to create sectarian differences. But Christians, convinced attacks on them are not seriously investigated, say this time they want justice.