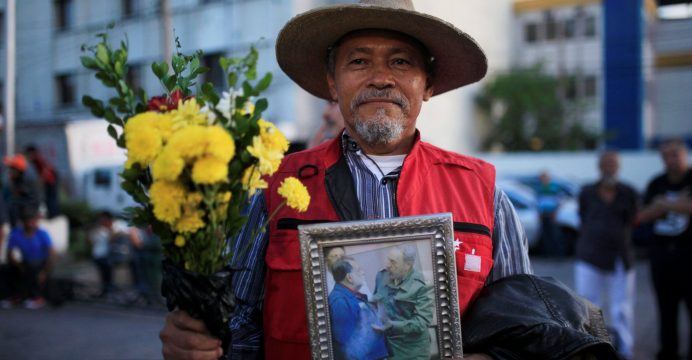 The United States may send a delegation to the funeral of former Cuban leader Fidel Castro, the White House said Monday, but neither President Barack Obama nor Vice President Biden will be in attendance.

At Monday’s daily briefing with reporters, White House press secretary Josh Earnest refused to speculate on who might be part of a potential delegation. Obama has been criticized for his statement in response to Castro’s death, which was seen by some in the Cuban-American community as teetering on praise for a man largely considered to be a dictator who punished his political enemies and tormented 11 U.S. presidents. Castro, 90, ruled Cuba for nearly 50 years before passing control of the communist island to his brother, Raul.

“We know that this moment fills Cubans – in Cuba and in the United States – with powerful emotions, recalling the countless ways in which Fidel Castro altered the course of individual lives, families, and of the Cuban nation,” Obama said in a statement Friday. “History will record and judge the enormous impact of this singular figure on the people and world around him.”

Rep. Ileana Ros-Lehtinen and Sen. Marco Rubio, both Cuban-American Republicans from Florida, warned that sending a delegation would be an unacceptable gesture of respect to a brutal enemy.

Ros-Lehtinen, whose family escaped Cuba when she was a child, said Obama’s statement “makes us sick” and that “I hope that president Obama does not send himself or a delegation to this tyrant’s funeral.” Rubio expressed similar sentiments on “Fox News Sunday.”

In response to the criticism, Earnest said Obama’s statement was meant to reflect his belief that American policy attacking Castro had often had the effect of enhancing Castro’s reputation and allowed him to make the U.S. a scapegoat for Cuba’s problems.

“There certainly is no whitewashing the kinds of activities that he ordered and that his government presided over that go against the very values that our country has long defended,” Earnest said Monday.

In the past two years, Obama has presided over the restoration of full diplomatic relations with Cuba and pushed for lifting the half-century-old embargo, which he says has been ineffective in forcing Cuba to establish a more open and democratic society.

President-elect Donald Trump has indicated he may walk back some of those advances, with aides saying he would “absolutely” reverse the opening unless Cuba agrees to “some movement.”

“Repression, open markets, freedom of religion, political prisoners – these things need to change in order to have open and free relationships, and that’s what President-elect Trump believes, and that’s where he’s going to head,” incoming chief of staff Reince Priebus said on “Fox News Sunday.”

Earnest told reporters that such a reversal would be anything other than an emotional reaction on the part of some Cuban-Americans who want to see the island remain frozen out of the international community. But others, including many younger Cuban-Americans, say the reality of the past 50 years showed it was the U.S. – not a Cuba increasingly embraced by the rest of the world – that was left out by an outdated and ineffective policy.

“I think it is very difficult for critics of this policy to make any sort of coherent evidence-based argument that, somehow, the United States has been disadvantaged by this [new] policy,” Earnest said.