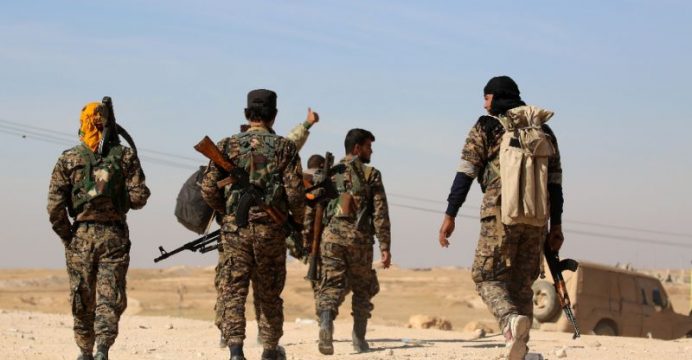 Coalition reportedly killed 20 civilians near the Syrian city of Raqa

US-backed forces pressed offensives on the Islamic State group’s strongholds in Syria and Iraq, as an air strike by the American-led coalition reportedly killed 20 civilians near the Syrian city of Raqa.

The Syrian Observatory for Human Rights said Wednesday that a coalition strike overnight had hit the IS-held village of Al-Heisha, about 40 kilometres (25 miles) north of Raqa. 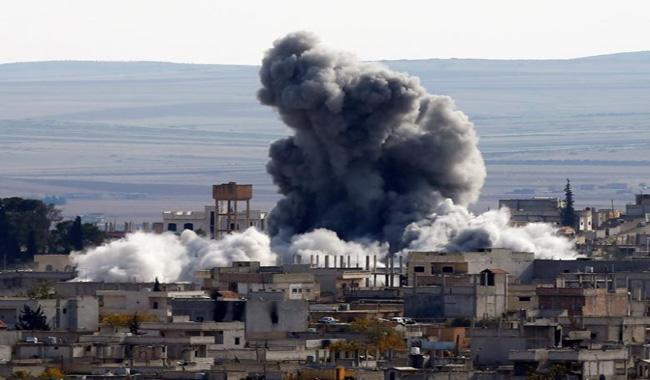 Rami Abdul Rahman, the head of the Britain-based monitoring group, said nine women and two children were among the 20 civilians killed and that 32 others had been wounded.

The Syrian Democratic Forces (SDF), the militia alliance that Washington is supporting in the assault, denied the civilian deaths.

“There is no such thing, and any such claims are IS news,” SDF spokeswoman Jihan Sheikh Ahmed told AFP.

Colonel John Dorrian, a spokesman for the coalition, told AFP it appeared there had been strikes in the area.

“After an initial assessment… the coalition confirms it did conduct strikes in the area described in the allegation,” he said.

“However, more specific information is needed to conclusively determine responsibility” for civilian casualties.

The Observatory said the latest deaths brought the number of civilians killed since US-led air strikes in Syria began in September 2014 to 680, including 169 children.

Meanwhile, the Pentagon said late Wednesday that US air strikes in both Syria and Iraq may have killed 119 civilians since 2014, a figure far lower than estimates by a number of monitoring groups.

WE LEFT EVERYTHING BEHIND

Some 200 families had fled Al-Heisha, according to an SDF official.

“Daesh fighters brought heavy weapons to our village and stayed among us so that if there were strikes they would hit us,” 45-year-old Saada al-Aboud said after fleeing the town, using an Arabic acronym for IS.

“They wouldn’t let us leave. We had to escape by running out into the fields, with our children and old people. What else could we do? We left everything behind.”

The SDF launched the drive towards Raqa on Saturday, upping pressure on the jihadists three weeks after Iraqi forces began their assault on Mosul.

Raqa and Mosul are the last major cities in Syria and Iraq under IS control, after the jihadists suffered losses that greatly reduced the size of the self-styled “caliphate” they declared in mid-2014 following their seizure of large parts of both countries.

The US-led coalition, which launched its air campaign against IS two years ago, hopes that driving the group from the two cities will deal it a knockout blow.

The SDF has been pushing south from areas near the Turkish border towards Raqa, seizing a string of villages and moving to positions about 35 kilometres (22 miles) from the city.

An AFP correspondent east of Ain Issa, the main staging point for the offensive, said coalition aircraft could be seen on Wednesday carrying out repeated air strikes in the distance and that IS fighters were shelling SDF positions.

Elsewhere in Syria, the Observatory said, eight civilians were killed in rebel rocket attacks on the Furqan and university districts of government-held western Aleppo, while state news agency SANA gave a death toll of six, with students among those killed.

Eight more civilians were killed Wednesday in air strikes on a village in Idlib province of northwest Syria, according to the Observatory.

In Iraq, an official said Tuesday that Kurdish peshmerga fighters had seized the town of Bashiqa near Mosul, which would be a final step in securing the eastern approaches to the city.

There were still pockets of resistance in the town, officials said, and an AFP correspondent in Bashiqa reported continued air strikes, gunfire, and explosions.

The peshmerga and Iraqi federal forces have been advancing on Mosul from the north, east and south since October 17, and last week pushed into the city’s eastern outskirts.

“We look forward to the continued support of the world and the United States in standing with Iraq in its confrontation with terrorism,” Abadi said in a statement congratulating Trump.

Officials are warning of long and bloody battles ahead in Mosul and Raqa, with IS expected to put up fierce resistance and to use trapped civilians as human shields.

More than a million people are believed to be in Mosul. Raqa in 2011 had a pre-war population of some 240,000, and more than 80,000 people have since fled there from elsewhere in Syria.

The International Organization for Migration said Wednesday that nearly 42,000 people had fled their homes since the start of the Mosul operation.