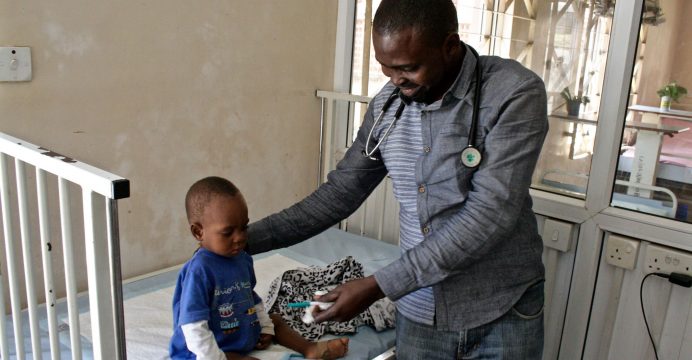 Scientists have identified genetic markers associated with resistance to the one of the most commonly used malaria drugs in Southeast Asia. The findings of two independent studies from Cambodia, published in The Lancet Infectious Diseases, could be used to help track and contain the spread of drug-resistant disease in the region.

The researchers found that Plasmodium falciparum, the most common species of malaria parasites, with multiple copies (amplification) of the plasmepsin 2 and plasmepsin 3 genes and the exo-E415G variant, was less sensitive to the antimalarial drug piperaquine and could identify with high accuracy which patients would fail treatment. However, more research is needed to establish whether plasmepsin gene amplification actually causes piperaquine resistance and to explore whether this association extends to other parts of the world.

More than 200 million people are infected with P falciparum, which kills around half a million people every year. Worldwide, antimalarial control efforts are mainly dependent on artemisinin-based combination treatments having replaced older drugs to which the malaria parasite developed resistance. Artemisinin plus piperaquine combination (dihydroartemisinin-piperaquine) is a frontline treatment for malaria in Southeast Asia. However, in recent years, the emergence of resistance to these drugs in Cambodia means that up to 60% of patients fail treatment in several provinces. There are fears that resistance could spread to other regions where malaria is endemic like sub-Saharan Africa where 90% of malaria cases occur.

To map the spread of resistance in real-time, and to help public health officials target malaria elimination efforts to the highest priority areas, genetic tools to detect the multidrug-resistant malaria parasites are needed. Genome-wide association studies (GWAS) aim to identify genetic variations among P falciparum parasites that can be linked to variations in drug resistance. Recent GWAS have found genetic markers linked to artemisinin (K13) and mefloquine (Pfmdr1) resistance, but until now, markers for resistance to other combination drugs had not been identified.

In the first study, an international team of scientists led by Dr Didier Ménard, from the Institut Pasteur in Cambodia, found that amplification of plasmepsin genes in the P falciparum genome was linked to piperaquine resistance. The research team began by collecting parasites from the blood of 725 patients treated with dihydroartemisinin-piperaquine. They analysed the in vitro drug susceptibility of 31 parasite lines using a piperaquine survival test, and compared the genomes of those that were resistant to those that weren’t.

The strongest signals were clustered around the plasmepsin 2 and plasmepsin 3 genes. The researchers then confirmed their findings in a larger set of 725 P falciparum parasites collected from patients across Cambodia since 2009. Individuals infected with parasites with multiple copies of the plasmepsin 2 gene (which are normally present in one copy only) were on average 20 times more likely to experience dihydroartemisinin-piperaquine treatment failure. Furthermore, the geographical distribution and rise in the proportion of parasites with multiple copies of these plasmepsin genes in Cambodia corresponded with areas with reported increase in dihydroartemisinin-piperaquine treatment failures in recent years.

According to Dr Ménard, “We now know that amplification of the plasmepsin 2 and plasmepsin 3 genes is an important factor in determining how well piperaquine kills malaria parasites. A genetic toolkit combining this new marker with markers of artemisinin and mefloquine resistance could be used to track the spread of resistance and provide timely information for containment policies. Piperaquine resistance, although currently confined to Cambodia, is a major concern, because patients suffering malaria are almost untreatable. At present, alternative treatments are scarce and the reduced cure rates lead to prolonged parasite carriage, increasing the potential of transmitting the resistant parasites, and endangering efforts to control and eliminate malaria.”

In the second study, Dr Rick Fairhurst from the National Institutes of Health, USA and colleagues analysed the DNA and measured the piperaquine sensitivity of a larger sample of 297 P falciparum parasites from Cambodia. Before starting treatment with antimalarial drugs, the researchers collected parasites from the blood of 486 patients from three different provinces in Cambodia where levels of artemisinin resistance and dihydroartemisinin-piperaquine treatment failure is common (Pursat), emerging (Preah Vihear), or uncommon (Ratanakiri). They then exposed these parasites to therapeutic levels of piperaquine and measured how well each strain grew. At the same time, they sequenced the entire genome of each parasite.

Parasites were more likely to survive exposure to piperaquine if they had two or more copies of the plasmepsin 2 and plasmepsin 3 genes, and the exo-E415G variant on chromosome 13. Similarly, in further analysis of 133 patients, they found that individuals infected with parasites carrying multiple copies of these plasmepsin genes were much more likely to fail treatment with dihydroartemisinin-piperaquine. They also noted that the prevalence of exo-E415G and plasmepsin 2-3 markers has risen substantially in recent years in Pursat and Preah Vihear where artemisinin resistance is common and dihydroartemisinin-piperaquine has been the frontline treatment for at least 6 years.

According to Dr Fairhurst, “By surveying the piperaquine resistance marker across Southeast Asia in real-time, we can identify those areas where dihydroartemisinin-piperaquine will not be effective, and this could enable national malaria control programmes to immediately recommend alternative therapies such as artesunate-mefloquine. This approach will be crucial to eliminating multidrug-resistant parasites in Southeast Asia before they spread to sub-Saharan Africa, where most of the world’s malaria transmission, illness, and death occur.”