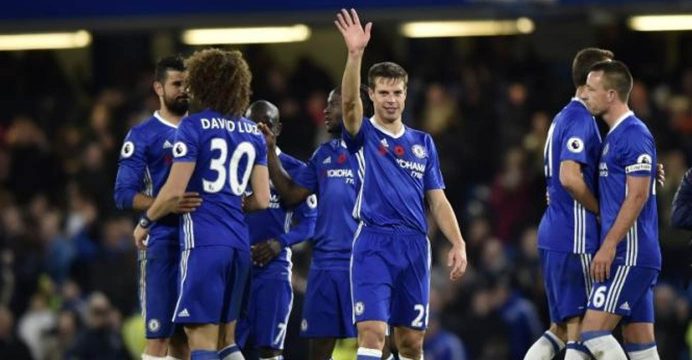 Chelsea crushed Everton 5-0 on Saturday to storm to the top of the Premier League with a vintage display after Manchester City were held 1-1 at home by a last-minute goal from promoted Middlesbrough.

It was the first time City had been knocked off the top all season. Chelsea’s sparking performance sent them a point clear, although Arsenal and Liverpool will have an opportunity to overtake them by winning home games on Sunday.

Successive losses to those teams in September raised questions about whether Antonio Conte’s side were ready for a serious attempt to regain the title they lost last season.

But Chelsea produced an irresistible performance with Belgian forward Eden Hazard scoring twice to inspire a fifth successive win for his team without conceding a goal.

“When you win in this way, it’s fantastic,” Conte told BT Sport. “It’s a pity that now we have to stop for the international break.”

Koeman was philosophical after his team’s heavy defeat.

“You have to accept sometimes in life your opponent is by far the better team,” the Dutchman said.

All had seemed well for City when Sergio Aguero scored his 150th goal for the club, converting Kevin de Bruyne’s pass, to put them ahead just before halftime.

City, who beat Barcelona in the Champions League on Tuesday, had 19 goal attempts in a dominant first-half performance but failed to make their early dominance pay and were stunned when Boro’s Martin de Roon headed home powerfully in the 91st minute.

“We did absolutely everything to win the game, controlled the game and in the last minute we concede a goal. It is a pity,” City manager Pep Guardiola said.

He denied, though, that his side had suffered a hangover after their thrilling triumph over Barcelona.

“Not really, we started amazing and played really good in the first half. We created six or seven chances and didn’t score,” Guardiola said.

Sunderland, bottom of the table and without a win all season, fought back for a shock 2-1 victory at Bournemouth.

Victor Anichebe equalised Dan Gosling’s early goal for the home side and despite being under pressure with 10 men after midfielder Steven Pienaar was sent off for a second yellow card, the Black Cats claimed three points at last thanks to Jermain Defoe’s penalty.